Newcastle United and Brazilians have rarely mixed well.  Moving from Lyon to St James` Park reduced the five-time title-winning captain Cacapa to lumbering catastrophe who was "slow to the point of immobility, cumbersome in the challenge and utterly bereft of any sense of position", his nightmarish spell at St James' effectively ended when he was dragged off 18 minutes and three goals in to a home defeat to Portsmouth.  Fumaca, somehow, was even worse, pitching up on Tyneside by the circuitous route of Catuense, Colchester United, Barnsley and Crystal Palace and displaying an inability to pass, head or control a football that was perfectly encapsulated in the five touches - each more panicked than the last - he took between failing to gather a pass from his own goalkeeper and conceding a throw-in during a woeful 37-minute non-appearance against West Ham United.  The Magpies' first Jogador do Brasil, Mirandinha, relocated from downtown Sao Paulo to the backstreets of Bedlington in 1987 and was, if only by comparison to his hapless compatriots, a genuine star, scoring 19 goals in 54 appearances before relegation, a comic reluctance to pass the ball and the arrival of Jim Smith as manager meant he was unceremoniously - "As far as I'm concerend he can rot on his pig farm," Smith famously raged - dumped on a free.  Four years, three countries and six clubs later he struck 12 goals in 18 games for Shonan Bellmare before tearing his knee ligaments during a heavy loss to Yokohama in August 1994. 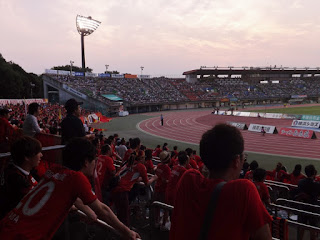 Bellmare had been founded in Tochigi Prefecture around the same time that Newcastle had last managed a major trophy win.  Moved by their parent company to the coast at Hiratsuka, they picked up three national championships and two Emperor's Cups before Japanese football went professional in the early-1990s, success disappearing along with the club's corporate backer and their most saleable asset, Hidetoshi Nakata, who departed for Perugia shortly before relegation in 1999.  Shonan had spent just two seasons in J1 since, but last year's runaway second-tier title-winners ended this year's first-stage in the comfort of 10th position, only four goals behind Nagoya Grampus, last club of Gary Lineker and Japanese champions the year before I jinxed them by moving in around the corner. 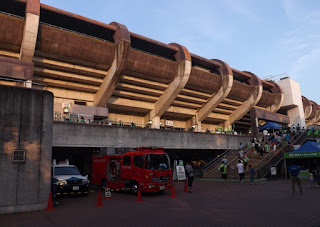 Suitably clad in factor 30 suncream, I began my pre-match preparations on Chigasaki's Aloha Street, meandering past surfer hangouts and Hawaiian-themed cafes in the direction of the town's Southern Beach, a slightly dirtier version of Tynemouth's Longsands with hawks standing in for seagulls, designated smoking areas and signs showing evacuation routes should a tsunami ever strike.  Baseball practice began where the surfboards petered out, lines of children, in helmets and full uniform, waiting their turn to hit or catch the ball.  At the back of the sand, a tarmacked path, shielded from the main road, ran all the way to Hiratsuka, ending at a ramshackle golf driving range, a concrete bridge and a rusting factory straight out of Steinbeck. 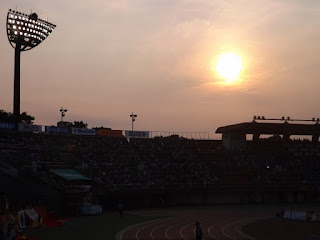 It wasn't until the station that I began to pick up the football traffic, with signs for shuttle buses and a steady stream of red and pale green shirts.  Twenty minutes after that, I finally hit the lengthy row of food and beer stands at the entrance to the stadium, of Brutalist design and plonked in the middle of a park.  Grampus had travelled in numbers, filling the centre and one and three quarters of the sides at the scoreboard end goal, and maintaining a rolling din to the tune of La Marseillaise through the opening 15 minutes of the game.  The two ends traded chants that mostly seemed to begin with diphthongs and end in a proper noun.  Bellmare battered the post, Nagoya had the occasional moment of excitement breaking forward but were more efficient at the back, rebuffing everything Shonan launched their way until the 40th minute, when Shuhei Otsuki inched off his marker and headed a cross between Seigo Narazaki's leap and his right-hand post. 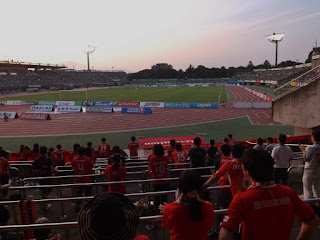 Grampus were back out first, the tannoy blaring increasingly inane adverts as a huge blue and green flag was shuffled overhead across the Shonan side of the ground.  Yoshizumi Ogawa headed wide with the goal gaping, the away fans responding with cries of amazement and a slowed-down version of Cecilia which carried on all the way to a similarly wasted set piece ten minutes later.  'Never Give Up' and 'Show Us Please! Your Best Performance' urged the banners; Grampus conceded a second goal to Kaoru Takayama but then scored messily with 14 minutes to play when Kengo Kawamata chested down and scuffed in off the underside of the keeper.  The match ended with a flurry of corner kicks, but the only line Nagoya crossed was the one behind the goal. 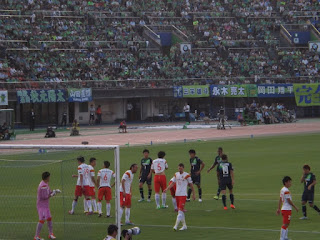