It was a typically eventful weekend in Greater Tokyo non-league. In the fourth-tier JFL, around a thousand people paid a fiver each to see Yogokawa Musashino  lose out by the odd goal in three to Sony Sendai; one division lower, the Kanto League's Joyful Tsukuba Honda were soundly beaten in the weekend's only other fixture that fixture required any money at the gate.  Further down the pyramid, there were wins for Zion and Tokyo Gas, the chance of a Sunday afternoon double header split by an airfield up in Chofu, and home games for the eye-catchingly monikered Bono FC, FC Coast, Tokyo Fire Brigade, Flutto-Flutto, Fuji Film, Ganador and Imp. 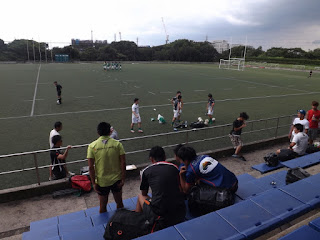 I'd toyed with visiting all of the above before plumping for the two games to be held in Yokohama's Hodogaya Park, starting with Kanagawa League second division mediocrities FC Asahi - once a Kanto League team themselves - against Yamato S.Matthaus, hometown club of two Women's World Cup winners and the J.League`s Jungo Fujimoto, on a rugby pitch with hastily assembled goalposts, a single stand, fifty or so Australians swigging back cans of beer while recovering from an AFL game scheduled immediately before, and a smaller group of slightly-built Japanese men milling about with soft drinks and 'True Aussie Beef' splashed across their shirts.  "What the hell's this?" someone spluttered. "Coffee?  There's no way I'm drinking any of that."  The footballers placed holdalls down to use as benches, Asahi's player-coach locking arms around a metal railing while occasionally snapping instructions at his team. After an opening half hour every bit as messy as Yamato's kit - two shades of grey with camouflage splodges - Matthaus smashed a first goal from a volley and a second with a trundler that caught the goalkeeper unaware and squirmed between his knees, the embarrassment compounded by the sympathetic noises from the stand.  "What you want to do next time, mate," somebody suggested, "is catch the thing." 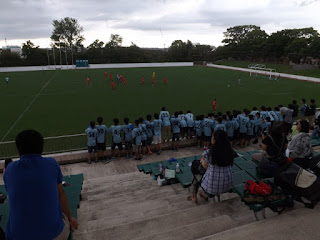 The Australians departed along with the sun, leaving behind a transparent bag full of cans, a sky as full of menace as a Nigel Pearson press conference and fewer people on the sidelines than there were on the pitch.  Asahi roused themselves long enough to miss an open goal, but Yamato - beaten 5-2 by runaway leaders Shinagawa the previous weekend  -  completed the tonking with three second half goals, leaving Asahi with just two points from seven games and only the appropriately named All Z separating them from the foot of the table. 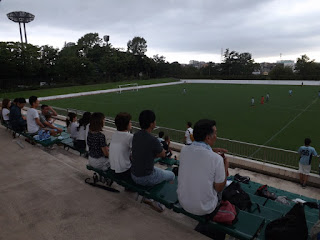 Things were a fair bit livelier on the other side of the park, where undefeated Yokohama GSFC came out to the sight of several dozen schoolkids in replica shirts and beach shorts shrieking "GS Cob-er-a" down plastic megaphones. Their opponents, GEO-X FC, were formed as recently as 2012 but had already climbed through two divisions of the Kanagawa League and were, their website promised, "seriously aimed at the JFL".  Cobra - marooned in the top-flight since 2006  - had won four and drawn two of their opening six games, while GEO had leaked 16 goals and won only once. It was 17 against when the Cobras scored from an early penalty, before the rain sent adults rushing for the back two rows and had the less hardy of the kids wrapping towel scarves around their heads.  GEO-X were all snap and bustle, the game soon degenerating into a series of punts, block challenges and swipes at thin air.  By 20 minutes in, most of the fan club had reached the conclusion that it was more fun to use the megaphones on each other, their attention only momentarily recaptured when Papa Boucary, the Cobras' star foreign signing, set himself like a falling tree trunk, tumbling just far enough to meet a cross with his forehead and redirect it harmlessly wide of the goal. 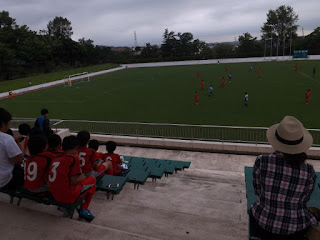 GEO's leveller came from a toe-poke, a knee and a stumble, their small group of supporters hanging over the fence as red shirts converged on the scorer from all corners of the pitch.  A second almost followed but the would-be hero tripped over in the act of squaring the ball into empty space.  The reds hit the crossbar and twice put the ball the wrong side of the post.  And then, with only seconds left on the clock and Boucary having just shanked a volley almost as far as the corner flag, GEO-X finally smacked in a second goal.  "Through football, strongly, we grow our hearts," said their website the next day.