One of a select band of football teams named after items of foliage, Machida Zelvia were also among the slightly larger cohort of clubs to have been unsuccessfully helmed by Osvaldo César Ardiles.   "I accepted to manage this team with great enthusiasm," the jovial Argentinean recalled shortly after embarking on a fourth coaching job in Japan. "What I am missing right now is results."  Previously, Ardiles' coaching misadventures had been variously attributed to a lack of transfer finances, an over-reliance on youth and a peculiar tactical mindset in which it seemed no longer important to stop the opposition scoring goals.  At Zelvia, it was the rules of football itself that turned against him: "If you looked exclusively at what happened between the two 18-yard boxes, there wasn't a better team in the division,"  reckoned the club's Scottish midfielder Colin Marshall. "It's just a shame we couldn't put the ball in the net - or stop it going in ours." 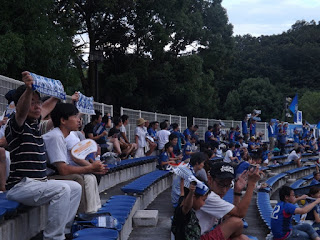 Machida had evolved from a successful junior football school which produced more than three dozen J.League players.  Propelled through prefectural and regional leagues by the tireless efforts of a primary school teacher, the club was "grassroots in the truest sense of the term (with) no financial backing from major companies or its own clubhouse or training ground".  In 2011, just 22 years after the senior team played its first ever game in the Tokyo League,  Zelvia sealed a fairytale promotion to J2 with a third-place finish in the semi-professional JFL.  "Our team is the Cinderella of the division," the recently hired Ardiles told the Japan Times. "It is going to be very difficult in J2 and it is also going to be a wonderful adventure".  Nine months later, the season closed with Zelvia three points adrift at the bottom of the table, on a negative goal difference of 33 and with Ardiles' replacement already in charge of the team. 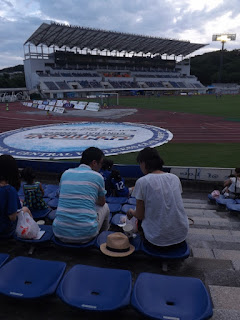 After a bumpy single-season stay in the JFL - Machida haemorrhaged star players after relegation and could only finish fourth -  the blues were back among the professionals in the newly-founded J3 division, their win column swelling like Hatem Ben Arfa's waistband during a goal-laden sequence which put them seven points clear of the competition with two thirds of the season gone.  The wheels came off with four defeats in their next six fixtures, a late rally failing by one point to grab second-place, and a spot in the promotion play-off, from Nagano Parceiro. 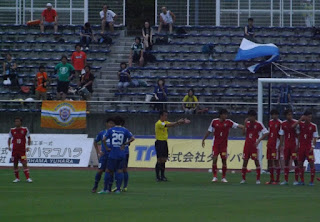 With a strengthened squad and the core of last season`s starting eleven still in place, expectations could hardly have been higher when the season began with the visit of Nagano in mid-March.  "I see no reason to think that Zelvia won`t finally get to raise that elusive third division trophy in November," wrote the Fortress Nozuta blog. But two losses in their opening six games - the second a 2-1 defeat by local rivals Sagamihara SC - had set the blues adrift of surprise package Renofa Yamaguchi, who remained nine points clear at the top with over half the season played.  Second-placed Zelvia's latest opponents, the oddly-assembled J.League U22 Selection, had made it through a turbulent debut season in which they used over 80 players, played every game away, and finished tenth of twelve clubs.  Built around a roster of more than 200 Rio Olympic hopefuls plucked from the reserve teams of every J1 and J2 side, the U22's are completely unrecognisable from one appearance to the next, their squad announced two days before each matchday and given just a single training session to try and achieve a coherent team. Machida had already put six goals past them in the fixture following the upset at Sagamihara. "A pointless disaster," was how one J3 watcher summed the team up. "A mess," agreed J-Talk Podcast's Ben Maxwell. "The perception is that the J.League is making it all up as they go along." 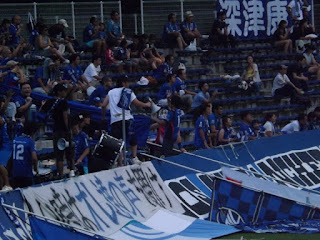 Zelvia's incoveniently-sited municipal stadium is a 20-minute shuttle bus ride or near hour-long yomp from the closest railway stop.  Fortunately, there was the usual panoply of curry outlets and stalls selling cold beer, fried octopus balls and taco rice in the carpark outside. A few dozen tennis players smacked forehands off a wall, speakers were blaring out Lenny Kravitz and Primal Scream, and huge banners draped over the concrete urged 'Enjoy Football' and 'One For All, All for One'.  Once through the ticket gate, the ground was dominated by a grandstand that would look more at home along the finishing stretch of a racetrack, with hulking floodlights in each corner and a three-quarter oval of uncovered stands, two of which were liberally dotted with fans in blue shirts.   The home supporters' section opened up with a slowed down Love Me Tender before the whole ground started twirling scarves overhead as the two teams took to the pitch. 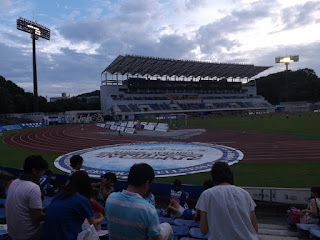 The opening minutes were disrupted by an injury to Ryuto Otake, the home fans entertaining themselves with a song to the tune of Cliff Richard's Congratulations, accompanied by mass bouncing, three drums and a trumpet solo.  Machida hit the bar with a free kick after a second appearance by the stretcher, but the most exciting moments of the half came within 30 seconds of the closing whistle, the home side up-and-undering a header clear of their goalline before a counter attack ended with a defender nicking the ball off Akira Toshima's toes. 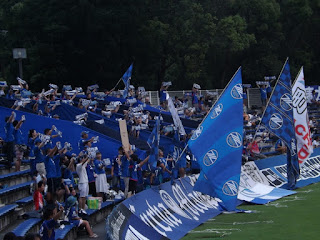 The second half had barely started when Takahumi Suzuki was afforded space to cut inside and wallop a rising, left-footed shot past the startled U22 goalkeeper.  The visitors responded with a header off the post, the warning passing unheeded as Nagoya's Koki Sugimori hooked in the equaliser from the very next cross.  The crowd, momentarily quietened, were soon roused back into song, Suzuki quickly stabbing in his second of the night and then completing his hat-trick after a smart turn and shot with just a minute left on the scoreboard clock.  It was enough for both Machida's 12th win of the season and a new record of 14 matches since their last defeat, shortening the gap to Renofa - still to play their 20th game - to six points and 19 goals.