Another Non-League Day, and the first I'd been in England for since the whole thing kicked off five years ago on a sunny September day at Birtley Town.   This time I'd traded views of Komatsu diggers, used caravans and the East Coast Main Line for the affluent surroundings of Ryedale Council's HQ,  where 2013-14 York Minster League title winners Old Malton St Marys - "We have been established over 100 years and have a proud history" their website succinctly states - were taking on the Teesside League's Nunthorpe Athletic in the early rounds of the North Riding County Cup. 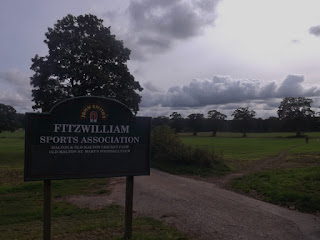 "What are you going there for?" a bloke in York had asked.  "All they've got are horses and people who like horses, Tories, a market place and a butcher's you can't get parked next to." More promisingly, the Guardian had it down as the food capital of Yorkshire, I found a brewery that promises to let you in for free, there was a book festival and market, and a town sturdily built of brick and stone, banks and independent traders intermingled with the more usual chain stores and charity shops. It's the kind of place given to understatement and conservative values:  "It's mild today," said a bloke outside a stationer's and hobby shop. "Well," cautioned his mate, "I wouldn't say it's cold." 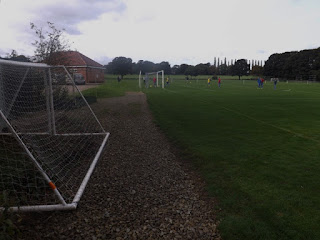 Old Malton's pitch is just past the site of a Roman fort and the Fitzwilliam Estate, separated from the main road by a cricket field, a rehabilitation centre for injured jockeys and a row of chestnut trees.  The far side had a stone path, a rope and a bloke picking up dogshit with a spade, while the seated end was a long bench along the clubhouse wall which had already been monopolised by a pair of flatcapped locals.  The home side were taking turns to piss in the undergrowth as Nunthorpe lined up for a photo.  "Handshakes, please," the referee bellowed.  "Bloody hell, he must be getting assessed," observed one of the flatcaps. 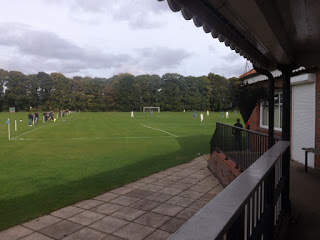 Nunthorpe began with some slick passing and lengthy slides across the grass, the strings being pulled by a player whose midriff was reminiscent of Middlesbrough-era Branco.  "Squeeze up!", "Winner" and "Good man," the home keeper shouted as his team advanced upfield.  Old Malton clanked the post, scooped the ball over with the goal gaping - "He couldn't do that again if he tried," someone laughed - and shanked wide with only the keeper to beat before Nunthorpe took the lead.  "You have to take your chances at this level," a spectator joked.  The home side finally got their goal via the side of a head and threatened a second when a winger cut inside, did two stepovers then unleashed a shot to the dugout side of the corner flag.  "Mark up, back post, know your man early," screamed a defender with pause for neither breath nor punctuation. 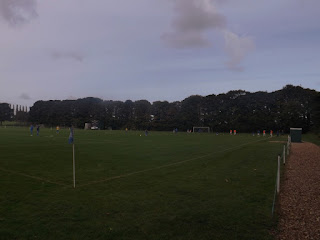 At half-time we retreated inside while the Nunthorpe team opted to sit out on the grass.  "We don't do tea," said the barman so I settled on a pint instead, which I was still finishing off when Old Malton St Marys finally took the lead. "On your toes, get it out, game on," breathless urged.  The home side scored a third from a header and a fourth when the entire Nunthorpe defence stopped waiting for a flag. "Could get a bit tasty," a spectator judged, though the closest the away side came to their naughty epithet - "In the 70s the place was famous for wife swapping parties.  They should have a goldfish bowl and a set of car keys on their badge," Harry Pearson reckoned - was a bit of histrionic hand waving from an overweight substitute and a mild rebuke from the goalkeeper for the referee which reminded Harry of a story about a female pitch invader at an Under-11s game in South Shields.  "The bloke who told me about it said she tried to attack the ref.  'Did she catch him?' I asked.  'Nah, she was a bit pregnant'".   As the visitors tired, the home team played through the ever widening gaps in their defence. "They're running but not tracking," a spectator told his mate as a substitute in luminous boots squared the ball to nobody.  When the whistle blew, St Marys headed indoors and Nunthorpe went back to the grass.  "Like naughty schoolboys," someone said as we set off back for the pub. 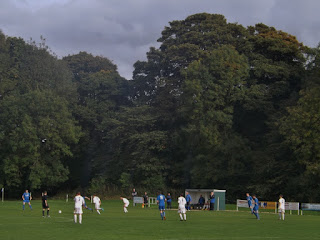 Thanks to @MaltonTom for the marvellous hospitality, Harry (@camsell59) for the talk on North Yorkshire Sporting Heroes in the excellent Ryedale Book Festival and @pibarrister & @TillerPop for the company in the first half.
Posted by Michael at 09:11