I had an advance return ticket to Garforth, the club where Socrates, past 50, pot-bellied and wearing five layers, a hat, a scarf and a pair of leather gloves, had made his final competitive appearance in November 2004.  By Friday night the chances of play were a bit slimmer than the chainsmoking ex-captain of Brazil had been for his 12-minute, four-touch cameo against Tadcaster Albion in England's 11th-tier.  "The soft ground had a battering during Tuesday night's game," Town's website said, "then had heavy rain and three days of frost." 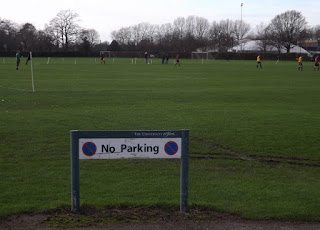 The expected postponement left me scrambling for alternatives. Just three games had beaten the cold snap in the top-flight of the Minster Engineering League and only one of them was in the city itself.  Riccall United, members of the York League since 1919 and its current defending champions - April's 7-1 whacking of Dringhouses ending a 37-year wait since the green-and-whites topped the division six times from eight in the mid to late-1970s - were at the University of York to play Harrison Signs, who'd won only one game all season and had already leaked 74 goals in the league alone. 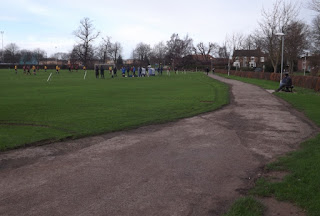 Much like Chelsea Riccall's title defence hadn't gone exactly as planned, with early fixtures falling to "cricket commitments" and a pair of defeats to Huntington Rovers leaving the village team nine points behind the pacesetters with over half the season played.  The big game attracted a pair of spectators who huddled on a bench by a footpath and a third who picked a spot next to a lamppost.  Some rope, two canvas dugouts and four yellow and black corner flags marked out the confines of the pitch.  "Heads on it, lads," Harrison's captain encouraged.  "Has anyone got a ball?" asked the referee.  "Let it do the work," shouted the home goalkeeper when one was eventually hoofed across. 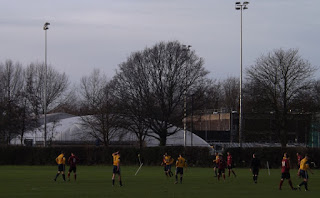 The champions had the first chance, a curler that was touched around the post and brought a groan of dismay from the player who had to splash through the mud to retrieve the ball.  "Make the next one count," urged a Riccall player, but 25 minutes had elapsed and a pair of free headers had been deftly positioned over the crossbar before one of his teammates could get the ball in the net.  A header hit a post, the rebound smacked an ankle and the resulting cross was eventually nodded in.  "Yard on," complained the scorer when the linesman raised his flag.  "Bust a gut," demanded the relieved Harrison's goalkeeper.  "That's a let off, isn't it?  Plenty of chat." 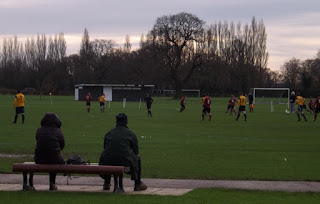 Riccall's next attack ended with a player being chairlifted to the touchline and the keeper palming a penalty away from his goal.  "It's gone," muttered a striker, while the bloke who'd won the kick slowly removed a boot and hobbled off alone to the changing block.  The home team almost managed a shot on target and then stuck the ball in the net from offside before the visitors scored the game's first goal with an hour already gone.  Moments later, a deflected free kick left the Riccall keeper flapping at air and the scores were level again.  The attendance was swelled by a couple of Koreans, tempted to linger as they cut past the pitch from the campus over the road, and a bored kid who was swinging on a gate.  United had a corner sidefooted off the line and a free kick clawed away, but Harrison Signs, heroically, held them at bay. "Get in," yelled their keeper when the whistle finally sounded, a Riccall attack ending with a player booting the ball over his bar. For the home club it was only their third point since beating Brooklyn FC all the way back on September 12th.