"I look back on Wembley with a mixture of pride and sadness," Selby's best known player told the Independent 13 years after the event.   Steve Sherwood turned out in "a few games" for Selby BRSC, spent half a decade as third choice keeper at Stamford Bridge and was loaned to Millwall, Brentford and the NASL before switching to a "badly struggling" Watford side in 1976.  Promoted three times in the next six years, by 1983 the Hornets were second only to Liverpool in the Football League; the following year they lost out to Everton in the final of the FA Cup, Andy Gray opportunistically heading a crucial second goal from out of the Yorkshireman's grasp.  "One poor decision killed the game," he remembered.  "There was still a long way to go but it died a death after that." 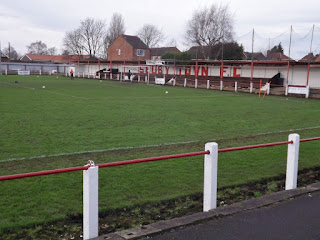 The club where Sherwood got his break suffered its own demise in 2013, the first and reserve team managers resigning, committee members stepping down and players drifting off elsewhere.  "We were so close to our 50th anniversary. It's a massive shame," chairman, secretary and ex-player Steve O'Mahoney lamented in the York Press. "A sad loss to local football," agreed Selby Town, who, with BRSC gone and Selby Olympia in the 14th-tier York Minster League Division Three, survive as the ex-coal mining town's senior team. 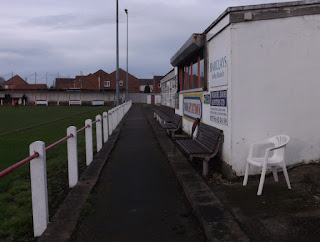 Formed in 1919, the Robins won five Yorkshire League championships either side of the Second World War, four times made the proper rounds of the FA Cup and flogged striker Ken Green to Grimsby for enough money to build a new home ground at Flaxley Road before joining the Northern Counties East League as founder members in 1982.  Relegated from the top division in 2012 after going through three managers and winning the same number of league games, the team have since been stuck to the middle reaches of the NCEL's second-tier.  "We're learning game by game," said manager Dave Ricardo, who was one of 14 different goalkeepers the club fielded last year. "I've played there about ten times before to help out friends," he reckoned.  "Sometimes when you're a manager at this level you have to do things you don't really want to do." 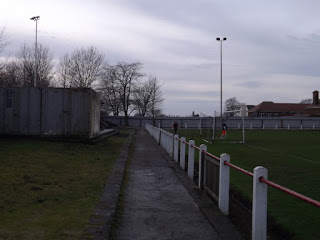 Ricardo's new-look side won 4-0 at Winterton on the season's opening day, scored 12 against Askern in the Vase and set an NCEL record when putting 14 goals past Lincoln Moorlands Railway, who arrived with no manager, eight players and another three who claimed they were stuck in traffic on the way to the ground.  Left waterlogged and without a competitive game for more than a month until the midweek win over Rossington Main, they'd dropped to 12th in the table, one place and 15 goals ahead of Derbyshire's Dronfield Town. "We will have to go game by game," Ricardo told the local paper. "A lot of hard work has gone on to get the pitch in a playable state." 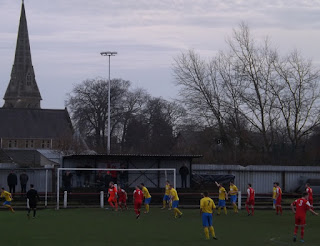 The programme cover, appropriately, had a picture of a roller, the teams chalked to a board by the turnstile and a crowd of around 100 in for Selby's first Saturday home game since November 28th.  There were paved steps down one touchline, a portakabin club shop promising "Low, low prices" and a kit stand behind the far goal with strips of artificial turf piled up at the side.  Advertising hoardings had been tacked to the front of the clubhouse, which had  handfuls of Quality Street laid out on its tables and photographs of Paul Scholes and David Beckham - the latter in his first game since the Champions League final in Barcelona - taken during a friendly arranged to mark the Robins' 80th anniversary in 1999.  I made my way towards the main stand, which had Selby Town FC written out in capitals, three rows of wooden bench seats and a rickety corrugated roof. 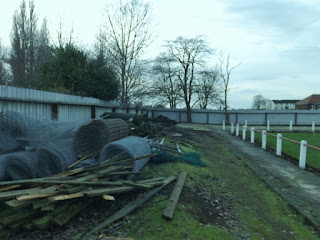 The home side started quickly, missing two early chances and forcing half a dozen corners.  "He's on for a blinder," said a bloke with a tartan rug draped over his knees after Dronfield's keeper blocked a third shot with his legs.  Inevitably, it was the visitors who opened the scoring, a diagonal free-kick sidefooted back across goal and turned in on the line.  "Never a free kick," a Selby fan spluttered. "Cheating monkeys," another clapped furiously.  "Come on Selby! They've got 12 men on the pitch, you know."  From besting the game, Selby's composure dropped as precipitously as their supporters' mood.  "Everything fucking quicker," screamed a midfielder. "Heads on," the goalkeeper demanded.  "They're just kicking it anywhere," a spectator grumbled.  "What do you think of the game so far?" asked a passing club official.  "Rubbish," said a fan.  "Missed three at yon end and the one down here should never have stood.  A right bloody cock up."  As he spoke Selby broke down the right, hit an early ball into the centre and Danny Bunch shot across the keeper and into the net. "There you are," said the bloke with the rug.  "We want two," his mate shouted at the pitch. 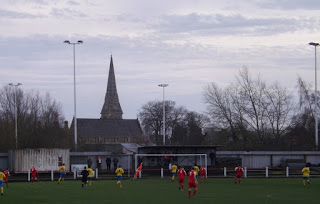 Selby carried their momentum through the break, Dronfield trying to break up the flow with a substitution which ended with an aggrieved player chucking his shirt against the dugout wall.  The Robins edged closer, the away keeper scrambling to tip a deflected cross on to his bar before a shot smacked against the same spot following a poor kick out of goal.  Dronfield scored from a corner, Selby struck back with one effort the keeper turned away and a second he could only stand and watch admiringly as it smashed off Bunch's boot and into the corner of the net.  The visitors slid a shot inches wide, Bunch thrashed a hat-trick chance straight on to the corrugated roof. "Nine left," said the linesman.  Dronfield hit the bar, tapped a third in on the counter and then struck a last-minute fourth that bounced just over the line.  "Geoff Hurst," said two men simultaneously. "Like a charity match," reckoned a visiting Leyton Orient fan, unfairly.  "Very disappointing," the bloke with the rug said, packing it carefully away into a vacuum storage bag.