Nestle Rowntrees FC had got through 116 years, the acquisition of its sponsor, five leagues and a pair of name changes, lifting the York League title on ten occasions and playing out almost a decade in the rarefied heights of the NCEL.  Goalkeeper Andy Leaning, arguably the club's most storied old boy, swapped Rowntree Mackintosh for York City Reserves, starring in a 1985-86  FA Cup fifth round tie at Anfield within months of turning pro.  In 1990, with future City, Northampton Town and Cheltenham striker Neil Grayson banging in the goals, the amateurs cantered to the Northern Counties East League Division One championship but were relegated instead, their Mille Crux ground falling foul of new grading rules.  By 2013 they had disappeared altogether,  withdrawing from the York League "due to a lack of players and continuing financial pressures".  The death knell, it was said, was the loss of their home ground, Rowntree's, the world's fourth largest confectionary maker when Nestle paid £2.5billion for it in 1988, cutting all ties and selling off Mille Crux - where the reformed York City had played their first ever home games in 1922 - to York St John University. "When we start the new season, we'll be without our most historic and well-known club," rued a York League press release. 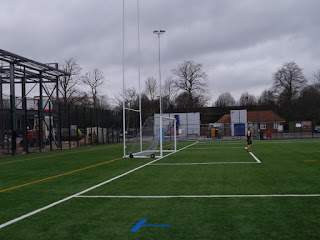 Since the departure of its longstanding tenants - Rowntrees unable to raise the £30 per game to play on their old pitch - Mille Crux has been converted into a £7 million sport and teaching facility formally opened by honorary graduate Howard Webb in 2015. St John's best-known actual alumni, PE student Matt Messias, followed Rowntree's route through the York and NCEL Leagues, eventually making the FIFA list and national headlines when he owned up to letting Paul Ince and Dennis Wise "kick shit out of each other" during a game between Millwall and Wolves.  "Against my better judgment, I opted to go with the players and they did exactly what they said they were going to do," he admitted after retiring - "by mutual consent" - as a referee. "Every time there was a crunch, I got told to leave my yellow card in my pocket. The crowd were chanting 'off, off, off' and didn't realise what was going on. They must have thought I was the worst ref in the world". 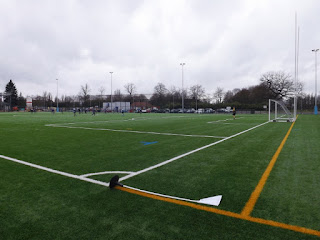 This afternoon's sole official has other problems to contend with, not least the fact there are no assistants in the 12th-tier York League Division One.  As the teams pass the three available balls around, Andy McEvoy is trying to find a spot where his jacket and the tupperware box he's stored the teamsheets in won't be blown away in the wind. A home player keeps warm in a parka while he finishes off a pre-match pie, the crowd edging up to 20 if you count the occupant of a pushchair and a bloke who stays sitting inside his car.  The game's being staged on one of the floodlit 3G pitches, Sporting Knavesmire - formed six years ago as an offshoot of the successful Hamilton Panthers youth sides and unbeaten in league football for 22 months and 39 games before October's home defeat to Hemingbrough United - clad in Fiorentina purple with fluorescent stripe and taxi firm logo, while St John go for two shades of blue with the student union's Twitter account splashed across the back.  The away team provide both linesmen, St John still waiting for their sub to turn up.  "If nobody knows, we go with defence," McEvoy explains to an aggrieved Knavesmire player when he contests the award of a throw.  "There were three of you blocking my view." 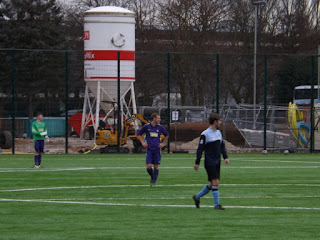 The purples take an early lead with a shot that hits both posts before trickling over the line. "Good stuff," claps their manager, the linesman's flag wedged under an armpit.  "We go again," yells an enthusiastic centre half.  Some errant Knavesmire finishing keeps the gap at a single goal, allowing St John to level midway through the half from a position the visitors complain is "a yard offside". Sporting edge back ahead when a cross is intercepted on the six-yard line by a St John defender, who attempts a clearance from the wrong direction and just whacks the ball in off his own crossbar, but the home side hit back almost immediately.  "You have to deal with that better," the away boss admonishes his team.  "That's too easy!" shrieks a defender. "Fucking hell!" St John clatter the inside of the post at one end, Knavesmire breaking to slide in a shot at the opposite goal.  "I couldn't see if yours was over the line," the ref says to a home player.  "That's half time." 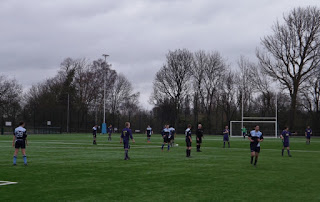 "Let's play as a team, eh?" asks the visiting manager, puffing away like Enzo Bearzot on an e-cigarette.  "We look good with the ball," one of St John's 12 men tells his teammates. "Can I just get a drink, lads?" the ref apologises, retrieving his holdall from the fence. Sporting stick a volley through the rugby posts before knocking in a fourth with the ref pointing to the St John defender playing everyone onside. The fifth goal follows with 25 minutes left, the wind so strong the corner flags have been flattened and the home keeper's kicks no longer reach halfway.  Back come St John, heeling in from a corner, before a Knavesmire player dances through four challenges and sidefoots home a sixth.  It's seven moments later and should be eight but for a dreadful attempt at a penalty, the home side looking spent with ten minutes still to play.  St John hold out, grab a late fourth goal themselves and then retreat to the warmth of the portakabin changing block.  "Best get off before the rain," a spectator says, looking at the darkening sky.  "Typical bloody Easter." 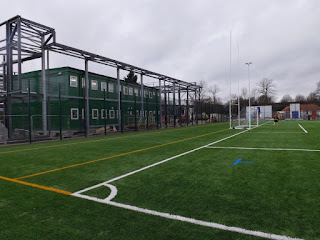