Nine and a half months into a season that started all the way back on August 15th the West Yorkshire League Premier Division has finally reached its penultimate round of games.  "It's been a good one for us but I think we've all had enough now," Wetherby Athletic boss Mark Forster writes in his pre-match notes.  "Football wasn't meant to be played in late-May (and) I'm looking forward to playing a bit of golf and watching some cricket." 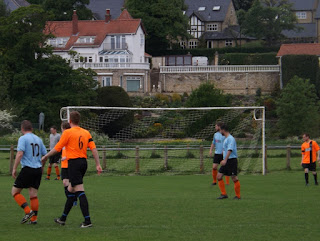 Forster recently completed his 100th game in charge of the eleventh-tier side, his players already guaranteed a best ever league finish to add to victory in the Barkston Ash FA Challenge Cup.  Both came despite the club spending four months in exile after their home pitches were submerged under one and a half metres of the swollen River Wharfe. "We've had records broken, cup wins, floods, stunning goals and cup heartbreak," the club's online programme enthuses before their final home game against Oxenhope Recreation.  "It's been a campaign we'll look back on and marvel at what happened." 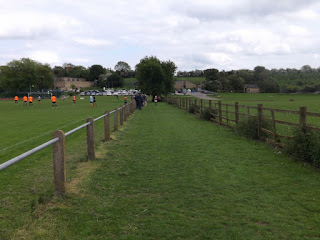 Formed at a 1949 public meeting called when Wetherby United withdrew from the Harrogate and District League, Athletic were promoted into the West Yorks League in 1997 and now run four senior men's teams, a women's side and a thriving junior section for boys and girls aged five to 18. "There is an amazing focus to get it right,” press officer, photographer and programme editor Pete Arnett told a profile piece in the Yorkshire Evening Post.  "We have a very strong core of dedicated people behind the scenes."  Arnett, who started doing media work for Conference North side Harrogate Town in 2007, is also behind for the club's prolific and innovative online presence, which includes a Twitter feed, website and more recently a digital programme for each home game.  The three-division, 44-team West Yorkshire League itself, in contrast, last maintained a site in 2008, doesn't have a single media account and instead relies on the FA for basic table and fixture listings. 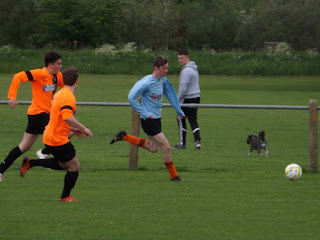 A short walk along the riverbank from Wetherby's bus station and 17th century bridge, the Ings has a dozen or so pitches, though only the one used by Athletic is marked out with a metal rail. There's a bloke sitting on a roller, another in a car with the sports news on and the door wide open.  A third stands by a notice asking spectators to keep off the pitch, a fourth under a tree and two more, with deckchairs and newspapers, have their backs to the town centre and a set of rugby posts. A bigger group is lingering on the terrace of the Sports Association bar.  A few groundhoppers are attempting to track down a programme. "I've seen it on the internet," one reckons, "but if you asked me how to print it off I wouldn't have a clue." His mate's equally perplexed.  "Apparently if you go on the website," he says, "and email the programme editor he'll send you something called a PDF." 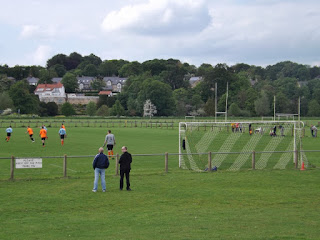 "Oxenhope look a bit livelier here," says a hopper a few minutes after the start.  "Bit end of season, isn't it?" another sniffs just before James Bailey, formerly of Crosshills and Bronte Wanderers, opens the scoring for the visitors a quarter of an hour in.  The match soon sparks to life, Wetherby's defence standing still while they wait for an offside flag, an Oxenhope player running through unchallenged until he's felled by the keeper on the edge of the box.  The ref gives a free kick and the everyone braces for the inevitable red card.  "He hasn't given one," someone shouts.  "Embarrassing," reckons an Oxenhope midfielder. "Eh?" the visiting keeper laughs. "You've caused yourself a problem with that diabolical decision,"a spectator helpfully advises the ref.  Harry Marshall scores a second with Oxenhope's next attack.  "This is probably my last Saturday," sighs a hopper from Birmingham. "I'm on to Rugby League next week." 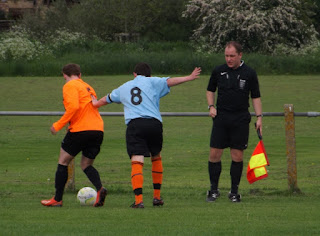 Matt Forster pulls a goal back for Wetherby.  "Three of you stood off," moans the keeper.  "We haven't come back out," the Oxenhope manager shouts.  His central defenders are still apportioning blame when Marshall hits a third. "We've fannied that," says an Athletic player.   Midway through the half, a more flowing move ends with Dan Moriarty jinking past the keeper to slot in a fourth.  ""Big last 20!" screams a defender in the traditional non-league call to arms.  "Good pass from Bailey," a hopper adds more thoughtfully after consulting his spiral-bound notebook. 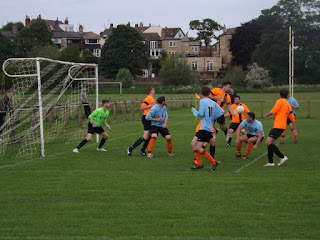 The West Yorkshire League season ends on May 31st when Forster's team lose 5-4 at treble winners Beeston St Anthony's, though work carries on for volunteers at the West Riding FA's 2015 Community Club of the Year.  There are open trials for Wetherby Ladies to plan, the hosting of a charity game for the British Heart Foundation and a 166-team junior football tournament being held over a single weekend.  Small wonder the Evening Postchose the club as its team of the week. "Working wonders on a shoestring budget," they wrote.  "The Tangerines are bearing fruit."