"If a child of the 1950s had been asked to paint a perfect non-league football ground," wrote the Northern Echo, "it would have looked, externally at least, like the gloriously haphazard Belle Vue." Predominantly volunteer-built and part-funded by Tommy Lumley's transfer to First Division Charlton Athletic, Consett's red-brick stadium was unveiled in August 1950 with 7,000 people there for the North Eastern League visit of Sunderland Reserves. "A dream come true," proclaimed a four-page feature in the following year's FA Book for Boys. 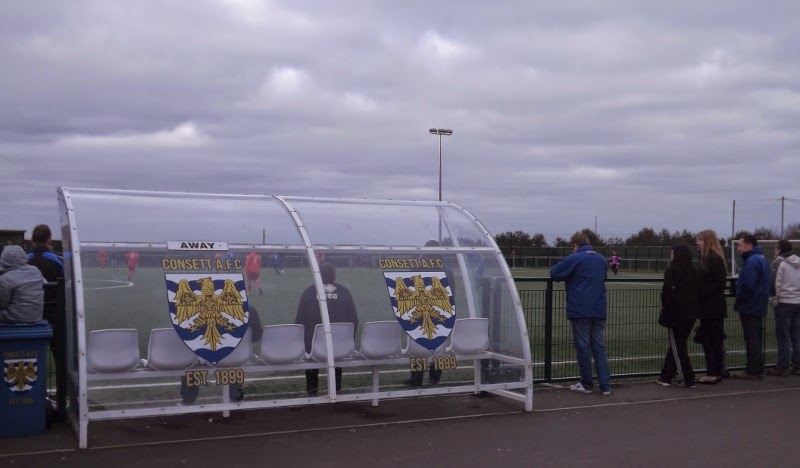 The surviving stand was a magnificent, disintegrating wreck when I first saw it half a century later. "The roof's hanging on by a thread, water's pouring through, the terraces are crumbling and the cement's porous," the club's treasurer commented.  "If they ever want to film men queuing for a shower at a prisoner of war camp they could use our dressing rooms," said manager Kenny Lindoe, who steered his team to three second-placed finishes in the space of four years while the ground fell to bits around them. Much loved by casual visitors but increasingly nightmarish to maintain, when Belle Vue hosted its final competitive fixture the toilet lights blew at 11am and a deep fat fryer exploded twenty minutes into the first half.  "It has a wonderful atmosphere, but atmosphere can't give you comfort and it can't keep you dry," chairman and benefactor Frank Bell explained to Northern Ventures Northern Gains. 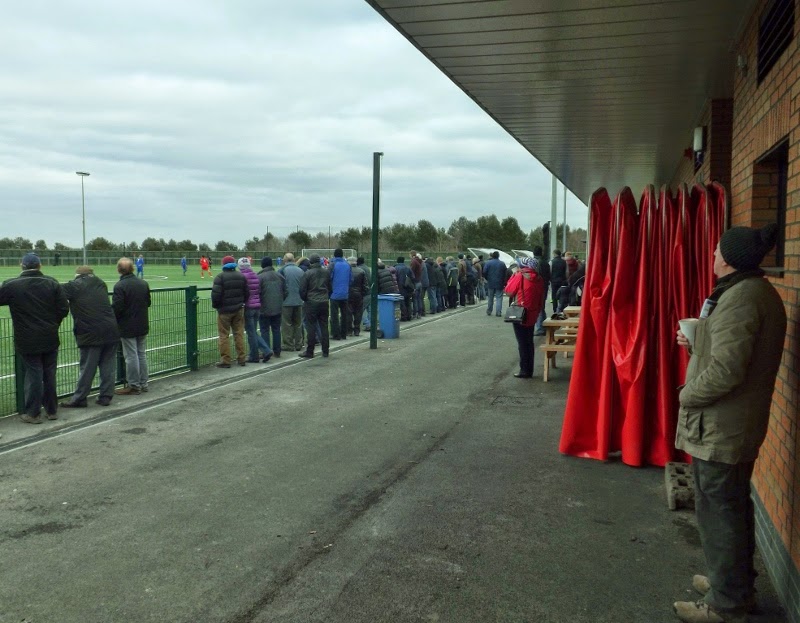 The new build was a decade and over £2.5 million in the making, has a 3G pitch and supports nearly 40 teams and ten full-time jobs.  When it formally opened with a friendly against a Newcastle United XI almost 3,000 turned up, the kick-off delayed by half an hour while they all got inside.  "A beautiful facility," Bell told reporters. "The main problem at the old ground was that it could only be used once a fortnight," Northern League chairman Mike Amos thought.  "Now the club has something that can be used all the time."  While some bemoan the lack of individuality in the design - goals-on-wheels, two flatpack stands, perspex dugouts and picnic tables set out by the food hatch - the club are more concerned with the extra revenue an all-weather surface, floodlit six-a-side courts and new clubhouse provide.  "This place is always full for Sunday dinner," a fan says in the bar.  "They must make a packet on it." "We're from Consett we used to make steel" states the lettering on the back of one replica shirt.  "We've got two Tescos" reads another. "Three inches of snow here yesterday," a Roofing official tells us. "I hope our lot can cope with the climate." 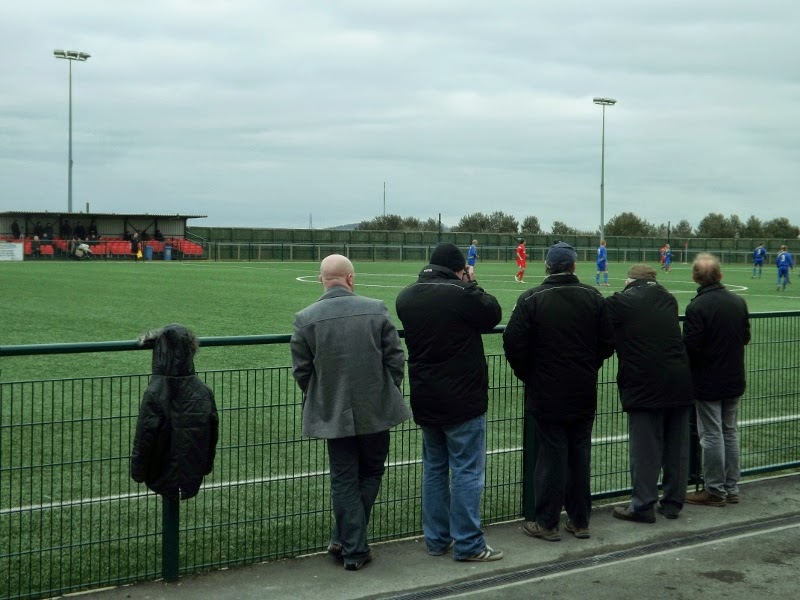 While Consett made strides off the pitch, their first-team were falling back into the middle reaches of Northern League Division One, Lindoe stepping down after a decade in charge to concentrate on finding players for the club's new reserve and academy sides.  In October the Steelmen were hammered 5-0 at Jarrow Roofing, John Campbell making headlines on Sky Sports News and a move to League Two soon after. "We can't afford let our standards slip," warns visiting manager Richie McLoughlin, who's lost Campbell's replacement and three-time FA Vase winner Paul Chow to a wedding.  "We need to be switched on from the very first minute." 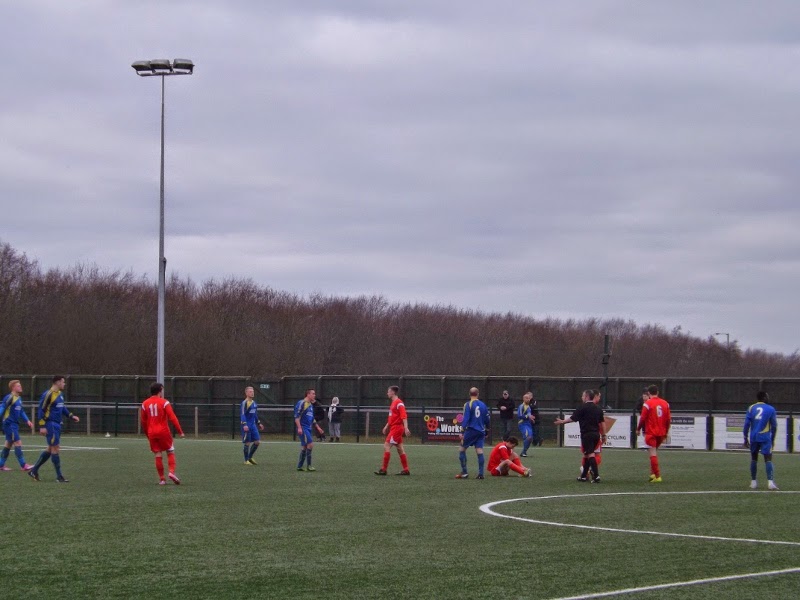 "I'm here to win things," Lindoe's replacement Colin Myers announced when he arrived from Blyth Spartans.  His improving team make the brighter start, Andy Hunter turning over one-handed when Chris Moore dinks an effort on his goal.  Roofing rarely threaten but keep Consett at bay until the 38th minute, when Danny Craggs rolls a free kick over the wall and into the corner.  A minute later and Michael Mackay - 39 goals this season and 244 in two spells bridged by four years with Hartlepool United - strikes against Hunter's post.  "The Mackems are four down, half the crowd's gone home and people are hoying tickets at Gus Poyet's head," a spectator shouts, scrolling gleefully down his phone. "He's lost the plot," says his mate, "and they'll still beat us in the derby." 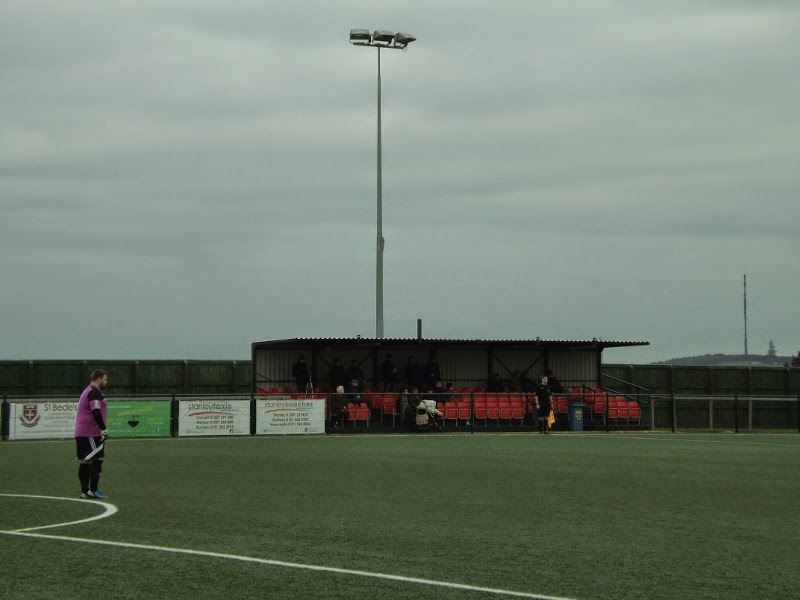 Half-time gives Roofing respite and the clubs' committee members hot drinks, mini chocolate rolls and sandwiches "with two kinds of meat".  Big screens in the bar show home supporters fleeing the Stadium of Light in their thousands.  "Glad I came here instead," says one bloke.  "Haven't been to Newcastle all season," says another.  "I'm done with it now."  The visitors are still going, Lewie Teasdale rounding the goalkeeper before Dan Madden darts in to clear, but when they make a mess of a throw Craggs strokes in a second and the game is all but done. "Nobody's on it," says McLoughlin, whose afternoon gets worse when striker Malky Morien is red carded after petulantly bumping foreheads with the Consett goalkeeper.  "Yer moved yer heed, bonny lad," a spectator shouts with evident relish. "There's no use crying aboot it now." 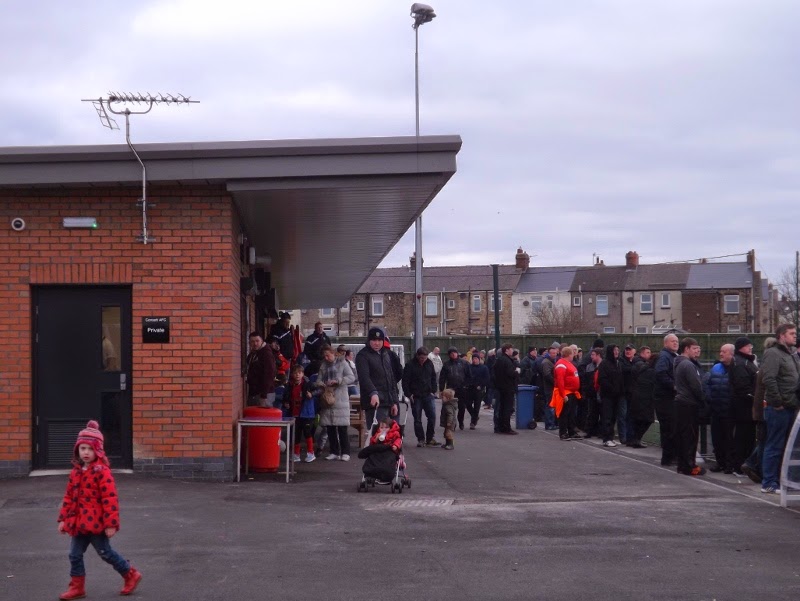 Consett score a third, Calvin Smith gathering Hunter's attempted clearance and chipping back over the goalkeeper's head, though Roofing end the game as aggrieved with the referee as themselves after Scott Martindale escapes with a yellow for a two-footed lunge in front of the main stand.  Nobody disputes that Consett are the better side.  "Worst we've played in a while," McLoughlin admits.  "We  were never in it."