Less than 24 hours after arriving home from Japan and I'm already on to my second game of the English 2015-16 football season.  The first was opening night in the Northern League, almost 250 people turning out to watch Hebburn Town put three goals past Ryton and Crawcrook Albion on the kind of undulating surface you'd expect to see a Ryder Cup golfer running a match-winning putt up and down on.  "It's like when you stick down a carpet without any underlay," a more exact observer put it. "Lovely little ground, though."  The following afternoon I'm part of a smaller gathering of 30 or so people and five dogs as Felling Magpies host Hexham FC in the Northern Football Alliance, a 125-year-old, 47-team competition in which only a handful of clubs charge any admission and one spectator recalls being greeted with the words "What are you doing here?" by a surprised chairman of the league. 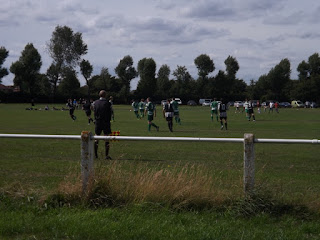 One of the two eponymously-named senior Saturday sides to be spawned by Gateshead Leam Rangers, the Magpies have moved up a division, broken away from their parent club and changed both their home ground and nomenclature in the five months since I saw them ease to victory at West Allotment Cetic.  "Same lads and management but a difference of opinion forced the split," a forum poster reckons, though another hints at dark forces within the FA.  The club's new base is an old colliery welfare pitch a short walk from the backstreets where the 8-year-old Chris Waddle honed skills that took him from a sausage seasoning factory to Newcastle, Tottenham, Marseille and Turin in kickabouts that numbered up to 40 a side - "Everyone from age six to 26 would be playing. If you didn't show, you didn't get a pass" - and Ronnie Starling, of "fluttering feet and butterfly nimbleness", began a playing career which peaked with two England appearances and an FA Cup win with Sheffield Wednesday. "A great strategist," went his profile on a 1935 Wills Cigarettes card, "his superb play will long be remembered." 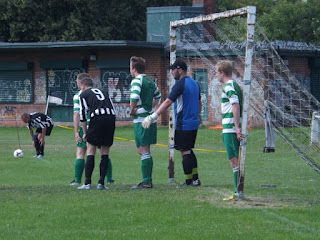 As with Jimmy Hagan, a later idol to the other half of Sheffield, Starling started out in the colliery teams at Usworth and Washington, both within a few miles of Wardley's smaller pit.  Closed in 1974, there's little to remember a mine that employed 850 people as recently as the mid-1960s, the area better known today for its golf course bar and a Travelodge by a roundabout on the way to South Shields.  Getting off the metro, I see a pair of sights that remind me I'm no longer in Japan: discarded tracksuit bottoms spread across a grass verge and a topless cyclist lugging a six-pack of Foster's as he goes full pelt down the high street to keep ahead of a bus.  It's another ten minutes before I get the more familiar glimpse of floodlight poles and the muffled thud of leather boot on football, a metal gate opening to a view of a pitch with rails on three sides and some yellow tape and a graffitied changing block on the other.  "A few bobbles, like," says the Felling keeper, prodding his grassless goalmouth like a minor counties tailender about to face Mitchell Starc.  There's more growth behind the net, the first shot of the game going two metres wide and straight into some bushes.  "Have we got another ball or not?" moans Hexham's goalkeeper as he hacks his way through the branches.  "Switch", "Squeeze" and "Get at him, man!" the players shout, the more organised of the spectators looking on from camping stools while swigging beer out of cans.  I make do with a jacket on some weeds in a spot I'm not likely to be bothered by chasing down stray balls. 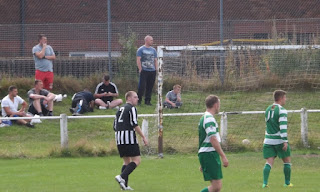 The Magpies have the better of the opening exchanges, shading both possession and the Greek chorus of dissent. "Howay referee," call one side; "What was that ref?" counter the other.  "Just wind it in, fella," the official tells an aggrieved home player after one disputed offside. "You say that one more time and we'll see where we both are." The ball goes up and down but neither side, for all their application, threatens much in front of goal.  "Let's have a bit of quality," laments one player as a free kick sails high and wide.  Felling take the lead when a cross is placed perfectly on to the number nine's forehead.  "What a ball that was!" claps a spectator.  "Where's the midfield, man?" the beaten goalkeeper ponders aloud.  "Heads up...composure...WILL YOUSE TALK?" 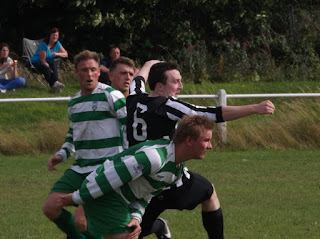 Hexham do most of the pushing in a scrappy second half, though a Felling player whacks a volley narrowly over and on to a grass bank before the green and whites level from a far-post prod with 10 minutes left to play.  "Another one's coming, they're on the ropes here," a Hexham player celebrates.  In the event, he's no more accurate than Liz Kendall's solution to Labour's post-election malaise.  With seconds remaining, Felling's number 9 picks up the ball, slides the winning goal under the keeper's dive and peels away towards the tape on the touchline, first pumping the air.  I might only be in England for as little as a month, but it's good to be back. 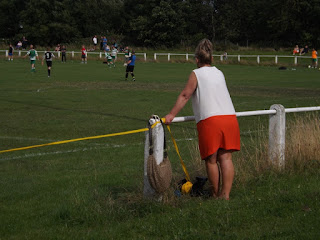