Starts don't get any better than consecutive titles in your first two years.  Established in 2007 - a couple of centuries after an engineman at the local colliery started messing around with locomotives - Killingworth steamed straight through the lower echelons of the Northern Football Alliance, collected two Benevolent Bowls and rocketed to a high of third upon arrival in the top-flight. "We've already climbed a few mountains in a short space of time," the club's chairman wrote soon after the blue-and-blacks upscaled from Amberley Park to the West Moor Residents' Association, took the name of a local boozer and hired player-coach Richie Latimer, who brought along the core of a Washington team that had just finished midtable in the second tier of the Northern League, which, league and ground grading points permitting, the Alliance feeds into at the end of each year. 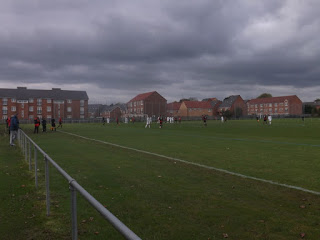 As the afternoons shorten, kick-off times are forced forward in a league where barely any of the clubs have access to floodlights,  making it a 1.30 start for the Northumberland Senior Benevolent Bowl tie against the world-renowned Wallsend Boys.  An early finish isn't all that's guaranteed with the home team's three cup ties this season producing even more goals than Newcastle United's second-half defending.  "We're going to have the tap water tested as I think it's causing a few of our players to go mad," thought chairman Colin Dunn after Killingworth and Birtley St Josephs traded six strikes, three red cards and nine successful penalty kicks last weekend. 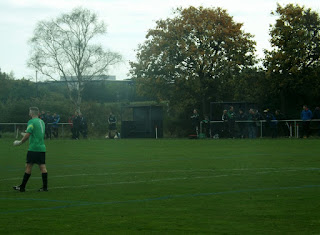 I get off the Metro at Palmersville (gratefully leaving behind a bloke in a neighbouring seat who got on at South Jesmond and started brushing his teeth), passing the pitch used by Forest Hall, a "quality award winning" chippy and a stone cottage the Stephensons once lived in before turning left off the Great Lime Road.  The ground's half hidden by a playground and the community centre building, a trestle table at the entrance manned by someone with a Killingworth windcheater and a printed sign.  "A quid in with a programme," he says, which is 50p cheaper than it used to be but without the half-time cup of tea.  Advertising hoardings are hooked over the metal perimeter railing, a blue five-a-side pitch marked out between the white lines.  There's a minute's applause, a flurry of howays, the first of the afternoon's planes rising over the far goal and the clink of a shot on the metal netting shielding the carpark from wayward strikes before Killingworth sidefoot an early first goal calmly inside the post.  "Argh, fucking hell," a Boys Club defender exclaims. 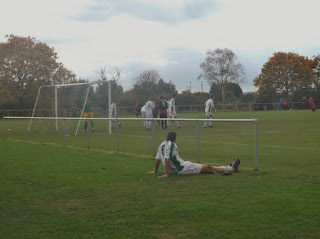 "Up the line," screams one player, "Switch on," another.  "It's a watcher," advises a centre back as a Wallsend winger hares vainly after a crossfield ball.  The Boys Club keeper has a playing style somewhere between Billy Whitehurst and Manuel Neuer, wears canary yellow shorts and possesses a voice twice as deep as the Dogger Bank.  "Time, time," he booms.  "Get out, get out."  Gradually, the game settles:  Wallsend prod and slide to feet, Killingworth hit the channels and charge upfield with intent.  "Can we get it?  Can we get it? Can we play?" asks a home defender, his teammates  distracted by an argument about who should track back.  "It's workrate," someone hollers.  "Not good enough," the people in front of the dugout say.  Fortunately for the out-of-sorts home side, Wallsend prove as potent in front of goal as the 2015 version of Emmanuel Riviere, coming no closer to an equaliser than a dinked free kick that bounces out off the edge of the post.  Right on half time Killingworth double their lead when a set-piece rebounds, veers upwards on the six-yard line and is hammered high into the net.  "Howay man, it's been all us," a Wallsend player moans. 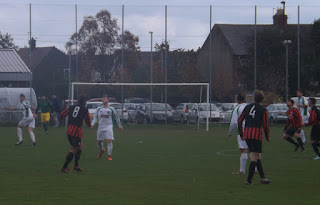 "Switch on," foghorns the Boys Club keeper at the start of the second half.  "Switch on," shouts a defender.  "Switch on," says someone in midfield.  What the away team can't switch are chances into goals until a midfielder finally manages to both time a run and find a forward, the cross slid in while four Killingworth defenders chorus "He's off!"  "Big last 20," comes the inevitable clap but the home team stroke a swift third goal and comfortably see out the rest of a game, scoring a late fourth after the net is reattached to the crossbar by a Boys Club defender teetering on his goalkeeper's shoulders.  Clouds stretch, an express train whizzes by,  "Howay ref, mate," someone pleads as the whistle sounds for yet another free-kick.  Programme or no programme, it's a cracking day out for a pound and the Metro fare. 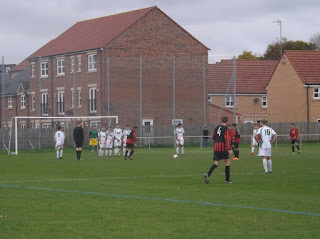