Since moving south in mid-September, almost all of my non-league exploration has taken place in the York Minster Engineering League, a five-division 57-team competition whose top-flight has recently been lifted to Step 7A of the National League System.  "I'm still not convinced there's anything below Step 6," someone joked when I told him I was off to Osbaldwick last weekend. "I always thought it was just something parents said to naughty children." 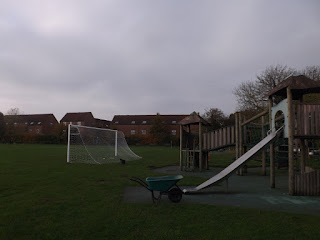 This afternoon I'm one division lower: despite a 100% league record and six wins on the bounce in all competitions, Heslington are still 11 promotions and a few hundred million in ground improvements from ever making it on to Match of the Day. While they head the Minster's second-flight by three points, their opponents, Easingwold Town, were relegated with just a single point last season and have lost all three of their league matches so far, throwing into some doubt their status as "the highest ranked team within the Easingwold area". 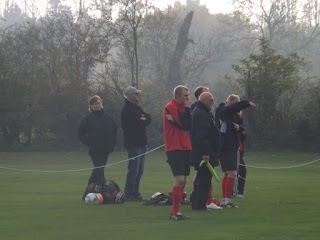 A few hundred metres south of the University of York, the Outgang's pitch is at one end of Heslington Village - where I find ivy-clad cottages, bank branches and a rotund bloke in a red jumper with Cremonese Football Club sewn across the front - at the top of a leafy turn-off from the main road.  Shared with, amongst others, the city's Civil Service Cricket Club, there's a brick clubhouse, plastic wheelbarrow and children's playground behind the near side goal.  "Come on Heso, from the off," claps the goalkeeper.  "I've managed to get that direct debit sorted," says one Easingwold midfielder to another.  "Our pace, our pace," the manager screams over from halfway.  A dozen or so spectators look on from between ropes; one linesman's wearing a manager's coat and dress shoes, the other, in jeans and a baseball cap, keeps his arms folded as he reluctantly inches up and down the line.  "Hit it!" shouts one player. "Keep the ball," urges another.  An Easingwold player goes down easily as he attempts to hold off a challenge. "Do that in the area and I'll caution you," admonishes the referee, who's handling the game in the manner of a mildly exasperated parent. 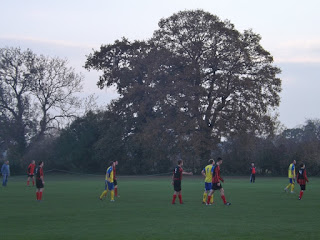 Despite their lowly position, the visitors start off marginally the better side. "Listen up, gentlemen," says the referee as they prepare to take a corner.  "No pushing, no pulling and no backing in."  There's a pause.  "That goes for you as well, number nine."  Heslington twice go close to opening the scoring, prompting an enraged "Switch on and get control" from the Easingwold side of the pitch.  The home team are no happier, a defender angrily contesting a throw-in on halfway.  "Are you looking down the line?" asks the ref.  "Eh?" says the player.  "Are you looking down the line?" "Eh?" "Are you looking down the line?" "No." "Then," concludes the ref, in a tone every bit as world-weary as one of Graham Greene's protagonists, "you have no business telling me whether or not it's gone out of play." 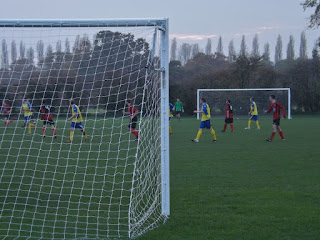 The only goal comes after 35 minutes, Easingwold finding the net at the second attempt after a shot comes back off the goalkeeper's stomach.  "Next time get it into row Z," says a player, pointing towards a climbing frame and two plastic horses on springs.  "Right! Everyone fight," rages a defender as he boots the ball angrily back in the air. 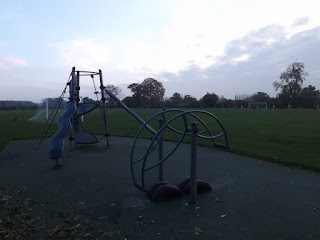 "They've earned the right to be ahead," the Heslington manager tells his team at half-time. "It's the first time you've been behind this season.  Now you've got to show them why you're top of the league." "Character," adds a player somewhat unnecessarily.  "Character." Easingwold almost grab a second before Heslington get going, the away keeper juggling a shot which is destined for the top corner before a head knocks it away.  Moments later, the home team smack the crossbar; the next effort, a bit further out, is deflected off a slide.  An Easingwold player drops to the ground. "Get him off," advises a Heslington defender, suspecting a ploy to slow down the game.  "Are you a doctor?" starts the referee.  "Aw come on ref, it gets dark early nowadays," Easingwold's captain intervenes.  Heslington finally bring on a substitute warmed up by 20 minutes of hitting a ball against a fence.  "What's happening?" asks a confused midfielder. "Where are we playing now?" 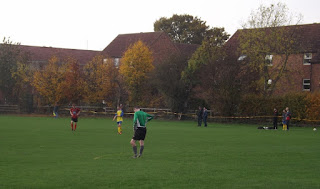 "Dig in" and "Winners" shout Easingwold's back four as Heslington keep pushing.  "We need a goal," says a player, but for all the home team's industry it just never comes.