From cup ties on North Tyneside back to the eastern outskirts of York. Osbaldwick, named after a 27-day king of anarchic Northumbria, spent considerably longer on top of the York Minster League under the princely management of the late Dave Taylor.  In the decade splitting 1984 and 1993, the club carried all before them, lifting ten consecutive championships, two trebles, three doubles, and becoming to the city's non-league scene what Liverpool were to England as a whole pre-Premier League, Alex Ferguson and the return of the managerial miasma otherwise known as Graeme Souness.  "We were pretty much the most hated team in York," Taylor's son recalled.  "Everyone wanted to beat us but we were the best." 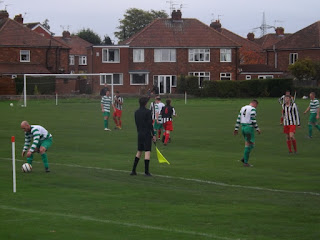 The new boss arrived to take over the champions in 1985, stepping down after 12 years and one last title success.  "He used to say it was the players who made it, but it was down to his dedication," another former player remembered. "We played for the man not the club."  It's a club that's fallen a long way since, needing three promotions in four years just to reclaim their place in the Minster League's Premier Division, and winless this season with only two points from the opening five games.  The sixth is at home to Tadcaster Magnets, the green-and-whites another side who've recently risen from the depths but are yet to win in the league, drawing one of four but knocked into minus by a three-point deduction; only the sporting misnomer that are Terrington Glory have been less successful so far. 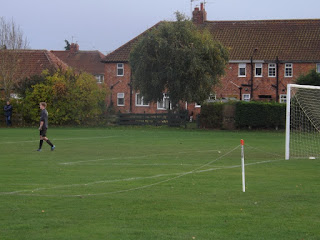 Osbaldwick's The Leyes is probably the only football ground I can walk to from home via a set of medieval city walls, the remains of a Norman castle and a city centre branch of Greggs.   It has a cricket net behind one goalpost, a pair of pop-up dugouts on the side nearest the scoreboard and bar, and a starting crowd of eight adults, one alsatian and a kid with a kickboard.  "Come on," clap the Magnets. "Get it right from the start," shouts the goalkeeper, his studs clattering repeatedly against a post. 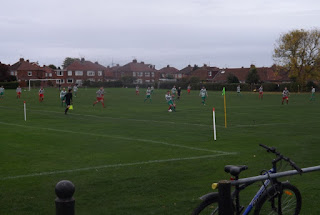 Tadcaster have the first shot, a 30-yard conversion which curves unerringly over the crossbar and straight into a hedge.  I catch fragments of conversation beneath the cliched chatter of players' shouts.  "I'll drop that pizza off for you,"  one bloke says.  "Hold it!  Six there. Six!" screeches a midfielder. "...and it's 1.7 miles from there to Helmsley," the spectator continues, unpreturbed.   The visitors take the lead when a shot cannons off the post, smacks a leg and goes over the line. "We go again," someone yells. "Switch on, sort it out."  Osbaldwick strike back with a shot that clears the bar and heads down the wicket like a fastball from Steven Finn.  "All a bit average," a spectator sniffs.  A minute later, the home side put a penalty against the outside of the post after the goalkeeper crumples an attacker just inside the box.  "Who was playing him onside, liner?" a defender moans.  "You and two others," says a bloke on the touchline. "It's a pity your feet don't go as fast as your mouth." 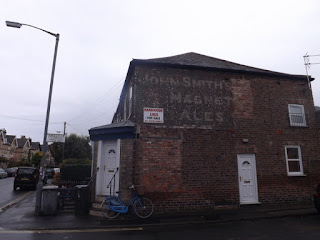 With the other linesman backed by fallen leaves and garden gates, it's the dugout-side official who bears the brunt of the complaints.  "Why aren't you giving that?" a player asks when the referee correctly signals a free-kick.  "That's three you've got wrong.  Three!" says a Magnets defender only seconds after he again plays a forward onside.  When the embattled official does make a mistake, another player yells "What the fuck are you doing?  What the fucking fuck was that?" from halfway across the pitch.  "There's children here, you know," a spectator tuts aloud.  In between, Osbaldwick have a shot tipped over and the Magnets rattle the bar.  "We're much the better footballing side," the home side's half-time teamtalk begins.  "The keeper's shitting himself.  Up the workrate." 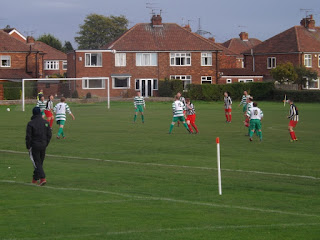 The black-and-whites find the inside of the post and the goalkeeper's arms as they dominate the start of the second half.  "We've got to get on the ball," a Tadcaster player explains, as if his teammates haven't yet grasped the point of the whole game.  With 15 minutes left the home side finally get their leveller. "Bunch of fucking wank," the Tadcaster manager shouts, appealing for a foul.  His team come close to taking an immediate lead, Osbaldwick's keeper turning away a palm-stinger and then watching helplessly as the next attack ends in a shot that crashes off the bar.  The sun comes out for the last ten minutes with Tadcaster playing most of the game in the home team's half.  "Come on, force a mistake," an Osbaldwick fan pleads just before a Magnets player hits the ground.  The free kick goes out wide, is chipped on to a balding player's forehead and ruffles the net like a sea breeze on a windshield.  "Game management," says a spectator, hauling his dog towards the exit. "That's the difference here."