"I'm planning some international groundhopping," James had mentioned back in mid-November.  "Only €5 to stand at Amiens and their ground looks brilliant."  Artfully lit and seen from the side of a road, the Stade de la Licorne - opened in 1999 and packed to its see-through rafters for a Coupe de France semi with PSG nine years later - looked more botanical garden glasshouse than football ground. "Everything has been designed for the optimal use of players and spectators," the club's website gushed.  "Looks a bit bizarre," thought James.  Closer up, the rust patches and discoloured glass stood out as baldly as our atrocious Gallic accents.  "They're taking it all out soon," James reckoned. "Too expensive to maintain." 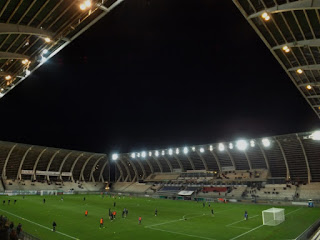 Much like the outside of their stadium, Amiens were a club in palpable decline.  The last trophy they'd picked up was the 1978 Championnat National, the third-tier league they dropped back in to at the end of 2011-12.  After three seasons' failing to keep pace with the promotion pack, the Picardy team were once again treading water, a trio of recent losses leaving them drifting back from leaders Strasbourg, the side who'd also edged them out on penalties in the 2001 final of the Coupe de France. "There'll probably be a decent crowd with it being a derby," I'd optimististically proffered while my head was flopping towards my chest on the afternoon train from Lille, but just an hour before kick off the city centre was fast closing up and the first bar we came to was deserted except for the owner.  "What are you doing here?" he asked after I'd finished stumbling through some rudimentary French. "We came from England this morning.  My friend's wanted to see an Amiens match for a long time."  "Okaaay," he replied, clearly implying he thought we were anything but. "He managed them in a computer game," I tried, but he'd already put our drinks down and was scurrying away to a table in the corner of the bar. 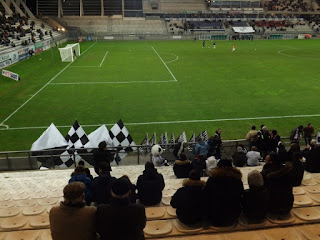 It wasn't until we reached the stadium car park that we found our first groups of fans. "I think everyone else has driven here," said James while I tried to work out what the ticket prices were.  There was a burst of French from over my shoulder.  "Non, merci," I replied.  "Gratis," the bloke said, holding up two tickets. "Eh, oui.  Merci." Inside, it was all open seating and non-alcoholic booze.  "There are two chocolate Santas in that fridge," James pointed out, while we counted up the 21 supporters who'd travelled from Dunkerque.  Their songs were all in diphthongs:  "Ah way ah woah," they chanted, twirling their tops around their heads.  The small turn-out of Amiens ultras was fronted by a panda bear, two blokes in puffa jackets and a third who drummed out the theme to 2001: A Space Odyssey as the teams raced onto the pitch.  "Ah way ah woah," went the Dunkerque end.  "Ah way ah woah." 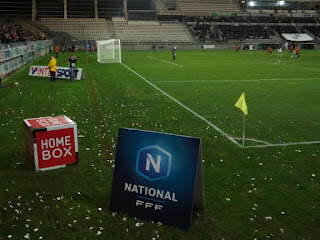 After a few minutes of half-pressure from the home team, Dunkerque snatched the lead with their very first attack, a corner kick bouncing like a skimming stone before Birmingham's Edwin Pindi thwacked it over the line.   As half the crowd seemed to be more engrossed in scoffing baby-sized baguettes packed to the brim with chips, we decided to beat the rush by joining the queue five minutes before the break. Twenty minutes later, the players had come back out and we were still at least a dozen customers away from the front. "Let's ditch it and get something later," I suggested. "I'm starving," said James.  We raced up the stairs, hearing the first shout on the bottom step, a roar in the middle and an outburst of joy the moment we got a view of the pitch, Aboubakar Kamara knocking in the equaliser after the Dunkerque keeper had made two quick saves.  Despite a late burst of pressure and the unexpected appearance of a man in a rabbit costume, that was as good as Amiens got. 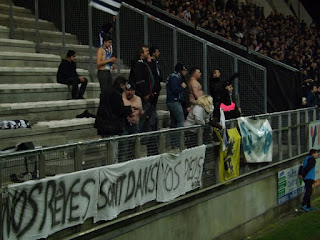 At midnight the restaurants were all shuttered and we were among a street of bars by the gargantuan cathedral, downing 8.5% beers while a group of women strutted their stuff to Chaka Khan.  "A bit different to back home," said James, as we polished off the last free pieces of dry French bread.