From Friday night in Amiens to a grey Saturday in Belgium, we headed back past Lille to Flemish-speaking Roeselare for the second stop on our three-game weekend tour.  Third top of the second division, the home side are coached by 1990s football trope Franky Van der Elst, whose playing career spanned four World Cups, 86 caps, 500-plus appearances in Club Brugge's midfield, nine domestic trophies and two Footballer of the Year prizes, one pilfered from the boot of his car while he was still out celebrating its award. 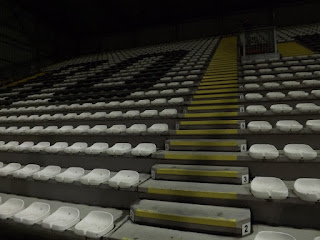 Founded in 1921, Roeselare's football club have rarely been among the country's leading lights, managing a total of just half a decade making up the numbers in the Belgian top-flight.  Promoted through the play-offs in 2005, the black and whites got a Fair Play pass to the UEFA Cup qualifiers - beating Vardar Skopje but going down heavily over two legs to Ethnikos Achna - before a swollen wage bill forced their return to more familiar surroundings at the end of 2009-10.  Since arriving as manager four years later, Van der Elst had been sprinkling bits of stardust around the Shiervelde; beaten only once since October, Roeselare trailed leaders Antwerp by seven points as they attempted to join neighbours Kortrijk back in the 16-team Pro League. 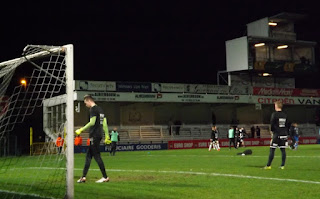 After a boozy afternoon, it was a thirty-minute walk from the Groat Markt pubs to Roeselare's ground.   "Are we the only people on foot again?" James wondered as we looked in vain for another pre-match pint.  "I bet there's nothing but a massive carpark and a bar the size of a warehouse under the main stand."  Unlike our fortuitous night in Amiens, we missed out on any freebies and had to buy our tickets instead, forking out a hefty €15 for the covered terrace on the far side of the ground.  "Not many here," thought James as we made our way across the near-deserted stand behind the goal, the few dozen people only partially obscuring a single one of the nine letters written picked out by the plastic seats. 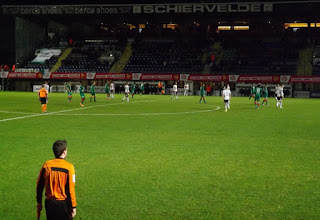 In a country where clubs routinely cluster just a few kilometres apart and most away trips involve journeys of under ninety minutes, Excelsior Virton really are a club apart.  "Belgium's answer to Carlisle United" one groundhopper had dubbed them, they'd brought 16 fans and half a dozen flags, which they spread out like beach towels along the expanse of empty plastic.  Talking Heads were playing on the tannoy while players warmed up by smacking shots against a post. "A bit basic," James pondered as we queued for plastic cups of Jupiler.  "It's the same routine I had when I played for my pub team."  The obligatory bloke with drum arrived and set up right next to our ears, while a gaggle of cheerleaders shivered their way through a desultory routine to a danced-up version of Somewhere Over the Rainbow.  The attendance slowly crept just over a thousand. "Have you noticed the only non-white people are in the Virton team?" James asked as the drum began pounding and I headed off for a second half-pint.

After a frenetic opening it was Virton who scored first, Raoul Ngadrira, once of Rupel Boom and Lokomotiv Sofia, finishing off a break through midfield. "Come on SV," swelled from the terrace, hands clattering against the hoardings in front.  Virton smashed a shot against the bar and then scored a second just before half time, causing a rush to the bar led by a bloke in a black and white stetson with cow silhouettes around the sides.  "I'm supporting Virton on diversity grounds," reckoned James as the first of the evening's monkey noises accompanied the two teams off the pitch. 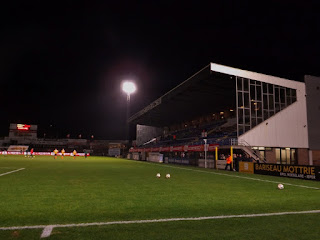 Roeselare hit the frame of the goal themselves but were otherwise every bit as basic as their grunting support base, Virton gleefully smacking a deserved third goal late on.  By that time we were already heading out of the ground towards the railway station, where there was only one train to anywhere after 10pm.  The carriage was almost deserted, a group of women halfway down loudly discussing the prospect of a  night out in Kortrijk.  "Sex on the beach, ja?" asked one. "Ja," her mate slurred.  "Sex on the beach."

Who said Belgium was dull?