A long weekend of drinking was beginning to take its toll.  It'd been two full days, many beers and at least one portion of meat and chips too far since we'd last had a proper meal.  "Nice this," said James, shoving the grated carrot and lettuce leaves firmly away from his peppercorn steak. 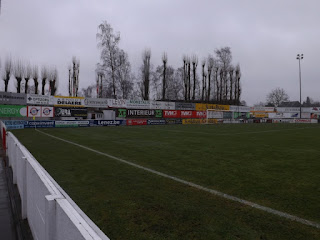 Gullegem had been an afterthought, a lower-league fixture chosen to plug a Sunday afternoon gap.  Defunct for six years since backing away from a two-club merger, the red-and-whites had dragged themselves up from the basement level of West Flanders football, taking five titles in six years after starting all over in 2008.  In their second attempt to get out of the third division, Gullegem were unbeaten in nine games, though they'd failed to win any of their last four and trailed visitors Sparta Petegem by five places and the same number of points. 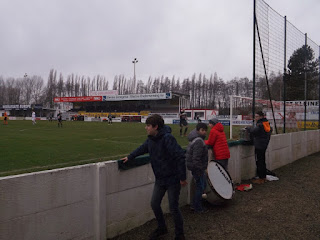 An unplanned late morning meant we started out late from Kortrijk's bus station, passing the town's first division football ground before getting off at a roundabout by a closed-up Carrefour supermarket that had looked much bigger on the map.  Rain dripped relentlessly out of the slate grey sky.  "Doesn't look too promising," said James as we walked up a sidestreet to the ground.  The woman at the ticket hatch mimed standing up and sitting down before we acted out standing and passed over our eight euro.  "Is there a bar inside?" I tentatively asked.  "Yes," said a steward, beaming as he ushered us inside. "Good beer!"  There was a terrace with concrete banking and a sloping corrugated roof facing a smart all-seater affair, hard standing, a corner bar and several dozen signboards making up what remained of the ground.  "Mike Ashley's dream," James reckoned. "There are more advertisements than seats."  The away fans had already grabbed a table overlooking the pitch, a bloke in a green-and-black scarf swigging bottles of cola as he leaned across the bar.  League ladders were pasted to a wall and a handful of trophies had been half obscured by crisp packets on a shelf above the fridge.  "Beer?" James tried.  "English!" said the barmaid, pouring out a half of Stella that cost €1.70 a glass. 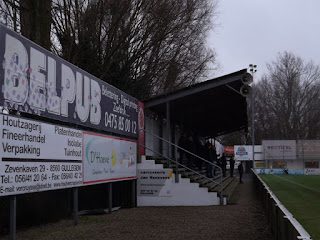 As the ground started filling, the away support dragged a drum behind the goal their team were attacking, draping a Green Army flag over a hoarding before chucking a single pyro onto the pitch as the players came out to Europop dance.  A bloke to our left started tuning in a transistor.  Bang, bang, bang went the drum.  "I don't think they've bothered with lessons," thought James.  Both teams had logos on every inch of kit space, Petegem winning out with Donky's Taverne filling both shoulders and the back.  Players had to hop over the hoardings to chase down stray balls, though passes invariably stayed on the grass and arrived at the feet of the intended recipient.  With Petergem's number 10 the slow-moving epicentre of almost every attack, the away side were better on every count than the only one that mattered. By the break it was still goalless and half the crowd had disappeared into the bar where a Belgian racer was leading a cycling race live on TV. 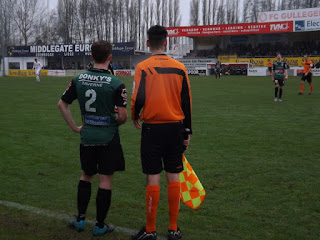 The teams came back out to a loud roar as one bike overtook another somewhere in a forest.  "Penalty!" screamed a pissed-up away fan everytime a player touched the ball.  The drum rattled tunelessly, and Sparta managed not to score from just six yards out only moments before Gullegem's Pieter Vangheluwe headed in the only goal of the game to a loud burst of Scooter. Petegem's players slammed hands against their thighs and stomped their feet against the ground.  "It should be three-one here at least," thought James. "Penalty," spluttered the drunk as a shot dribbled harmlessly out of play.   We chugged half-pints right through to the final whistle, then walked off the booze on the three miles back to Kortrijk Station.  Later that night, in a Lille pub recommended to us on Twitter, we half watch St Etienne lose to PSG while working our way down a menu of 18 beers each at €5 a pint.  "Been a decent weekend," James reckoned.  "Cheap tickets, great beer and plenty of chips." 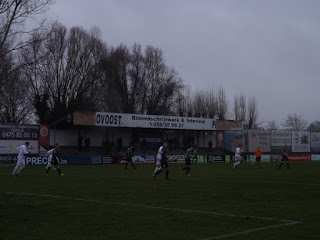