A lot had happened since I last saw FC United.  After seven long seasons in the Northern Premier, the fan-owned club finally went up while celebrating a decade since starting out in the second division of the North West Counties League.  They'd reached the last-eight in the FA Trophy, the first round proper of the FA Cup and raised half of the £6.5 million needed to build a home of their own,  Benfica providing the opposition in a first game watched by a crowd of 4,200.  Impressive feats for a club Alex Ferguson spitefully derided as "a bit sad" and who one misinformed pundit declared would be over by Christmas when it was founded in opposition to the Glazers in 2005.  "Since we started this Christmas comes every Saturday," one fan memorably retorted on the baking hot April afternoon I watched them celebrate a second promotion in just two years.  "Our club, our rules. I've never had a feeling like it." 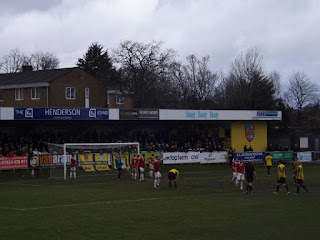 While the English spa  is slightly down at heel - the busiest shop in the Victoria Centre is a Poundworld and the massive Wetherspoons is crammed to bursting  - it's more visibly well-to-do than backstreet Moston.  Hometown of smashed-nosed Champions League clogger Andy O'Brien, Spice Boy John Scales and Donald Simpson Bell, the first professional footballer to sign up for the Great War, it's still more often associated with cream cakes and conference hotels than centre halves, though the pub at the station is already rammed with travelling supporters when I get off the train from York.  "I forgot there was a game on today," the barman confides as I attempt to ease life into limbs cramped by the sort of legroom that Dennis Wise would baulk at.  "I saw the first wave coming off the platform and thought 'Oh fuck'"  Outside, the rain hasn't dampened the perma-queue outside Bettys Tea Rooms, where Harrogate Town were reformed in 1919, five years after losing their first team to the trenches and three since Bell - a school teacher who played as an amateur with Newcastle and Crystal Palace before turning pro at Bradford Park Avenue - got the Victoria Cross for knocking out a machine gun at the Battle of the Somme. Almost a century later, a club that's spent much of its existence in the Yorkshire League could conceivably soon be in the same division as York City, semi-finalists in the 1955 FA Cup.  Second in Conference North, just four points behind leaders Solihull Moors, Town are financially supported by a multi-millionaire housebuilder and purportedly have the second biggest budget in the league.  "The owner's thrown a lot of money into the ground and team," one fan tells me, "but this year's the first time we've really looked like doing anything on the pitch.  The manager would have probably been sacked if his dad didn't run the club."  The PA's advertising an Abba tribute night - "Tickets going fast" - as I get into the ground.  There's a garden shed above the main stand for media use and cover on all four sides.  "Bit plush this," someone reckons.  "They've even got a choice of soaps in the bogs." 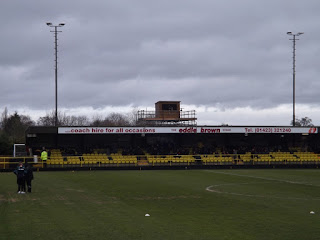 Harrogate have won three in a row since surrendering a three-goal lead at FC United in January, where they eventually went down by the odd goal in seven. “When you lose in that nature, the pain carries on," Town manager Simon Weaver told the local paper.  Down in 16th, United haven't taken a point since and have lost their last three away games by a combined total of 12 goals to two. "All set up for them to win," a sceptical local reckons.  "These are the games that Harrogate always manage to mess up."  I'm starting to think he might be right when the nervy home side are gifted an opening goal, Brendon Daniels' cross eluding everything but the corner of the net.  "Poor," says one spectator as the visiting players hold their heads in their hands.  "All we care about is watching FC," chorus the unbowed away supporters, who make up at least half of the 1,300 crowd.  "See United away, see United away." 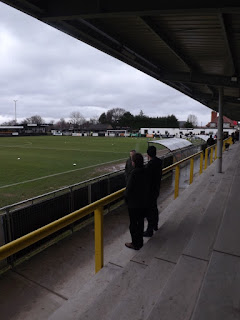 Harrogate double their lead when a simple ball dissects the United defence and Jordan Thewlis slides in past the unprotected keeper, then score a third within a minute of being reduced to ten men,  Warren Burrell sent-off for a studs-up challenge but Jack Emmett bursting through on goal with the away fans still hammering their displeasure at the tackle on the home team's dugout roof. "We're the yellow black army" starts up from behind the net.  "We all hate Leeds scum" rumbles from halfway in reply.  The fourth, from Paul Clayton, is almost apologetic, the visitors still without a shot on target despite pushing five men up front.  "Worst performance I've seen at this level," someone says of the FC team. "There's no fight to them, is there?  Watching this, you'd think they'd had a player sent off and were just going through the motions trying to keep the score down."  "Attack! Attack!" urge the fans in red and black scarves.  "All that's missing is a sour-faced Dutchman with Ryan Giggs whispering in his ear," a bloke reckons.  Harrogate rub in their superiority with a late fifth from substitute Joe Colbeck, a veteran of over 200 Football League appearances with Bradford City, Oldham and Hereford United. "Don't worry about a thing," the away support sings on, "cos we're FC and we'll be alright".  As we leave, one of the fans is a bit more succinct.  "Bobbins," he mutters. "Keep playing like this and we'll be going straight back down."