From free of charge to £26, I'd moved significantly higher up both the country and the football food chain to Inverness Caledonian Thistle, a club whose season had begun with a Europa League qualifier in the middle of July and who had, according to a preview in The Guardian, "enjoyed the finest season of their short history and lost one of their star players, Marley Watkins, to Barnsley for a 400% salary increase".   Not that much higher, then. 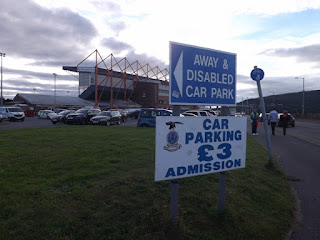 The Caledonian Stadium is a functional ground with a gorgeous, windswept setting, though on a previous visit the view had been severely marred by the numerous shots of then-manager Terry Butcher.  The ex-England man spent the halcyon years of his stuttering managerial career by the Moray Firth, reverting to more customary form in the half season it took to further demoralise and then implausibly relegate the hapless Hibs side he inherited from Pat Fenton.  The gap at Thistle was filled by a more succesful former Hibee,  John Hughes topping a penalty shoot-out defeat in the 2014 League Cup Final by leading a team some were touting as potential relegation fodder to third place in the SPL and a 2-1 Scottish Cup victory over Falkirk, the club's first major honour since its founding with the merger of two Highland League sides in August 1994. 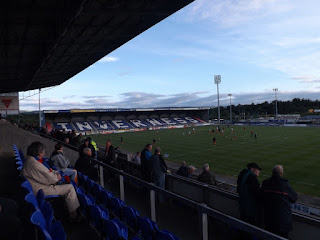 Tickets bought over the phone - "You'd be better off in the top tier where the roof will keep you dry," the woman said optimistically - we walk the 20 minutes or so from the city centre to the club shop portakabin to pick them up, passing an industrial estate, a main road and then, with the stadium so close you could drop kick a ball into it, a long bend along the southern bank of the Moray Firth.  The ground is squat and open cornered, with a low-ceilinged, double-tiered main stand, identical covered areas behind either goal and a couple of rows of seating beneath a gantry on the side in front of the A9 road.  The other Thistle have travelled from Glasgow with about 100 fans but there's no sign of their "sinister" mascot or, even more disappointingly,  Christie Elliott, signed from Northern League Whitley Bay after a spell playing on an old school field in Jarrow. We spend two minutes flicking through a programme littered with typos, the last of the 3,000 crowd filing in under the Kessock Bridge like figures from a Lowry sketchbook. 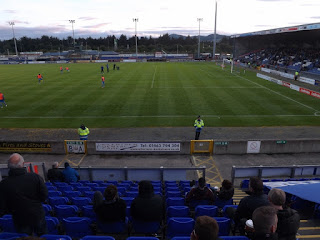 "Caley!" screech a phalanx of kids, clattering their hands against a family enclosure hoarding.  "And it's Partick Thistle, Partick Thistle FC" the away end responds before the atmosphere dies back to a muted commentary on the game down below.  "More conversation, lads!", "He seems to be fast but his footballing skills might be lacking" and, more urgently, "Wake up!"  Caley start brightly then swiftly fade, the most eventful moment in the Partick goalmouth occurring when the sprinkler turns itself back on and almost douses the goalkeeper. "What's going on?" shouts one home fan. "We need half time," says another. 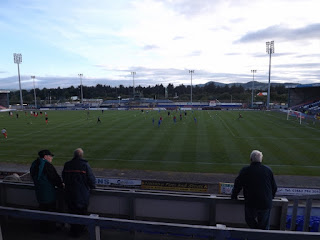 The break doesn't do much for the home side's cohesion.  Partick whack the crossbar, but for all their nice moves look no more likely to score than a tongue-tied teenager.  The home crowd grows increasingly restless.  "He needs to bring some fresh legs on or some fresh ideas on or something," a fan loudly diagnoses.  Caley belatedly produce a few moments of excitement, runners driving at the hitherto unharried Partick defence, but neither side commits enough to getting the win and the goalless draw seems inevitable long before the whistle blows.  "Grim," says a fan, edging along the row two minutes before the end. "Grim, grim, grim."