When football was a religion and Tyneside one of the industrial powerhouses of the world, there were 85 teams in the Wallsend and District League, 19 shipyards on the Tyne, and 1,500 people employed at the town's Rising Sun pit, "probably the most complete coal preparation plant" on the planet when it opened in 1906. The last of Wallsend's collieries closed in 1969, the Swan Hunter cranes were sold off to India 40 years later, ending a century and a half of shipbuilding on the site, and there are a mere handful of men's football teams left playing on Saturday afternoons: the chance to see four of them on old miners' welfare pitches was too good an opportunity to miss. 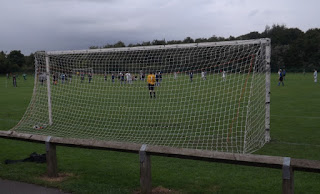 Think Wallsend and football and it's the Boys Club of Shearer, Beardsley, Bruce and Carrick that invariably springs to mind.  Their senior team were taking on Lindisfarne Custom Planet - the name a combination of a local workingmen's club and a firm that sticks logos on polo shirts - on one half of the Rising Sun Sports Ground, while Willington Quay Saints hosted Wallsend Labour Club on the other.  Scarcely remembered today, a century ago Willington Quay produced footballers with the same kind of regularity as Swan Hunters did ships: Henry Chambers played for Liverpool and England, Joe Clark reached an FA Cup semi-final with Cardiff City and Francis Cuggy, born up the river in Walker but spotted at Willington Athletic in 1909, would go on to win the Football League with Sunderland, two caps for England and back-to-back Galician Championships when Celta Vigo tempted him away from North-Eastern League management at Wallsend.  "The first coach in our history," begins one Spanish profile.  "He was one of the great successes of the Vigo team." 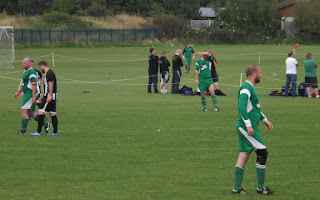 There are seldom any scouts on view in the Northern Alliance second division - 12 below the level at which Cuggy's first professional side comically underperform  -  a smattering of substitutes, team coaches, family members and the bloke with the changing room key present to see the third-bottom Saints take on the newly-christened Labour Club, last season's High Howdon Social currently the closest challengers to Gateshead A's teenagers and their 13th-tier totaal voetbal. At first glance, both seemed to owe more to the Victorians than Rinus Michels.  "Are ye still trying to play?" a Boys Club player joked as the Quay Saints centre-forward stepped over the rope splitting the two games.  "Straight in lads, from the off," bellows a voice from one of the pitches.  "Big five minutes," resounds from the next.  "Stand up, strong!" and "Get in! Get in!" 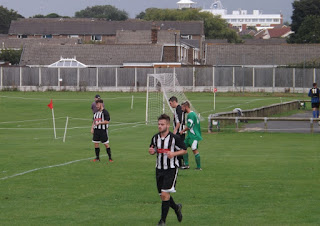 "Christ's sake referee get involved," Harry Pearson had recently identified as being "the traditional call that heralds the start of the North-East football season." Shortly after kick-off there was an equally familiar call and response, "Don't foul" swiftly followed by a cry of pain and a body hitting the ground.  "Right shoulder, right shoulder," someone urged.  "And after all his -ologies at A-Level he decides to be an actor," a spectator was confiding in an injured player who'd just arrived on his bike. 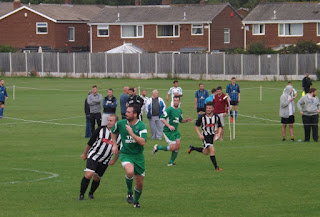 Willington's number 9 threw up a one-on-one, taking four touches to gather as the Labour Club defence variously tried to claim offside, a foul or handball.  A few spectators wandered out with pint glasses. "Let it go, man," a player shouted to the referee. "Was it fuck," said another, a Quay Saints substitute snapping his flag up for offside.  Willington headed a goal off the crossbar, the celebrations paused while the referee made up his mind. The Labour Club had levelled within a minute, though I was otherwise engaged passing back a stray ball.  I missed the Quay Saints second completely, my attention on Lindisfarne's number 10 as he sidefooted a volley from a yard in front of to three yards wide of the Boys Club goal.  His hands went straight to his head. "Gerrin!" came the cheer from the other side of the rope. 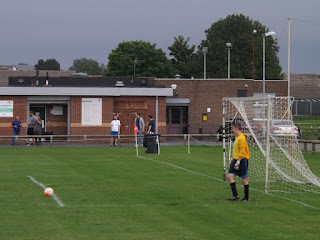 Half-time was just five minutes, the teams in circles on halfway while substitutes, children and a bloke in jeans and trainers kicked spare balls into goal.  Gavin Fell, first-team coach when Whitley Bay swept aside all-comers in the FA Vase, patiently explained what he wanted from his Boys Club team.  "We've started slowly again," said a Lindisfarne player moments later, his goalkeeper spectacularly palming a shot away from the net and into a tree. 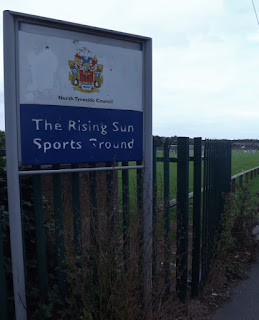 The Boys Club hit the tape on the crossbar before slotting in the opening goal. "That's shit, ref," someone shouted.  "Ref! Ref! Foul all day."  Willington were encamped on the Labour Club's 'D', their number four, topknot swinging, sweeping up behind. I looked across just as Lindisfarne's keeper spread himself like Manuel Neuer to deny the Boys Club a second goal they scored anyway with their very next attack.  The Labour Club hit the goalkeeper and the post, drawing back level with a tap-in from a cross. Lindisfarne conceded a third and then a fourth.  "How long left, ref?" shouted a spectator waving a crutch.  "Seven?  Bloody hell, man, you said five just a minute ago."