What's Europe's biggest cup competition against a sunlit evening of north-east non-league?  The previous night, while Ronny Deila's Celtic capitulated in Malmo, I was enjoying eight goals and bespoke stadium fittings as Jarrow Roofing saw off Seaham Red Star.  24 hours later,  Manchester United were bludgeoning their way past Club Brugge and I was back to the Alliance, Birtley St Joseph's hosting Newcastle Chemfica in the 12th-tier Bay Plastics Division One. 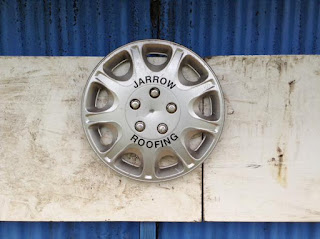 Disillusioned with life at Step 14, Birtley St Joseph's had been on the brink of folding the club entirely when they were voted into the Northern Alliance in May 2012. "We needed a new challenge," secretary Colin Beal told the Newcastle Evening Chronicle. " We took the decision if we couldn't transfer to another league we'd wrap things up". Promoted in their first season, the new boys had since finished fifth, set up a development team and left the Birtley Welfare Ground - where one of the first three Northern League games was contested in September 1889 - to share "for the forseeable future" with Wrekenton Blue Star,  the current champions of the Gateshead and District Premier League. 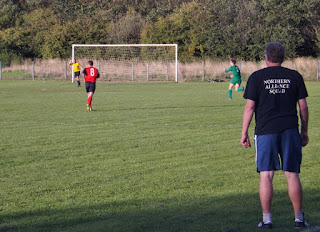 Entrance to the ground was through a rusting gate opposite the village hall, the pitch railed off and encircled by trees, with retractable dugouts placed on the touchline and three metal portakabins behind a spiked fence.  There were 15 other spectators when we arrived just after kick-off, including three men with dogs, one on his way home from the shops and another who left his car engine running and drove off at half-time.  The visitors, a team I'd last seen up against Heddon-on-the-Wall, were defending the goal in shadow, the linesmen and home keeper shielding their eyes as they tried to follow the play.  "Work! Work!" and "Seconds!" shouted the managers, pacing the pitch as the ball careered around midfield and the defence strung out in a line.  "You're not marking space," Chemfica's keeper told his right back.  "Goalside at all times," warned a centre-half.  "Where do you want to be?" the manager asked. "You're not helping there."  When the ball did hit the net a flag was already up for offside.  "Borderline, that," said a spectator, her tone as confident as Gary Neville with a slow-motion replay and computer-generated line. 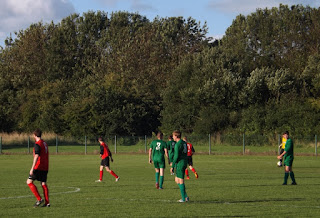 The first-half went by at a frantic pace, the second delayed while everyone waited for the referee.  "Howay ref, man," a St Joseph's player complained as he finally made the pitch. "Where's he gannin now?" someone else laughed. "Arrgh howay, he's left his whistle inside."  The deadlock was finally broken just before the hour, St Joseph's number 9 sliding a cross which his strike partner knocked in at the far post.  "Mint, that," yelled the keeper from the other end of the pitch.  Chemfield's goalkeeper made a stop with his feet but was beaten from the spot after a forward was tripped just outside the box.  "The ref over-ruled it," said the linesman.  "He wants a boot up the arse," someone muttered as he wandered back to halfway. "These'll start losing their rag now," predicted a spectator. "Always happens." 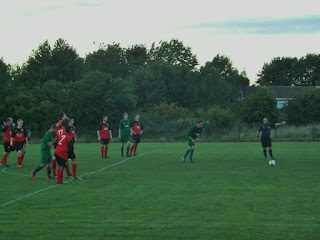 It took another 60 seconds for Chemfica to lose another goal, St Joseph's adding a fourth from a corner with ten minutes left, and a fifth with the sky darkening and a spectator searching the bushes for a lost ball.  "Nothing changes," shouted the home manager.  "We keep our shape." 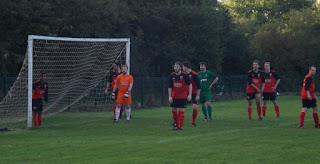