In 2001, Boavista were almost a century old and had just five Portuguese Cups and a pair of league runners-up positions to their name. Only once - Lisbon's Belenenses way back in 1946 - in the 66-year history of the national championship had a team outside the triumverate of Porto, Benfica and Sporting claimed the title. And then, under the influence of president João Loureiro - lawyer, author and ex-lead singer of an electro-dance band  - head coach Jaime Pachecho and the proceeds of a youth programme that had almost simultaneously unearthed Jose Bosingwa, Petit, Raul Meireles and Jorge Silva, something magical took place.  The black and whites not only won the Primeira Liga by a single point from city neighbours Porto, they followed up by coming second to Sporting in 2002, winning through the first group stage of the Champions League and then making the semi-final of the 2003 UEFA Cup, where they lost out to a goal from Henrik Larsson. "The hardest day of my life," rued Pachecho.  "Luck was not on our side." 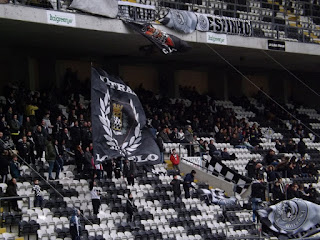 What happened next was slightly more predictable, the coach lured away to Mallorca and star players soon departing for the big boys his team had so briefly deposed.  With their income severely depleted by a ruinous €45 million ground redevelopment, Boavista slipped back to midtable, not even the return of Pachecho - sacked after just five games in Spain - enough to arrest a slide which left them embroiled in a corruption scandal and marooned to the third division for four seasons from 2009.  Not until Loureiro's return by popular demand in January 2013 did the club's fortunes change, a court overturning their original relegation before they were plucked two divisions into an enlarged, 18-team top-flight. 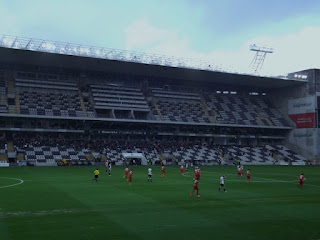 Thirteenth last season, 50 points adrift of champions Benfica, the re-hiring of Bolivia's Erwin Sanchez, talisman of the title-winning team and briefly Pachecho's replacement when he departed for La Liga, hadn't done much for Boavista's league position, the home side starting just a single place off relegation.  Rio Ave - beaten finalists in both domestic cup competitions in 2014 - had meanwhile accrued 12 more points, ex-Spurs flop Helder Postiga and a 1-0 victory from October's reverse fixture. "Playing against such a strong team gives us extra motivation," Sanchez had promised in his press conference. 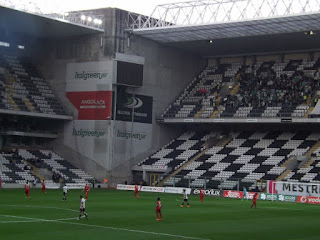 Both of Porto's major grounds are on the purple line from the airport, the Estadio do Bessa near Francos or Casa Musica while the eponymous Estadio do Dragao - where I took myself off to as soon as I'd cleared the passport check - is the final stop. There were big Porto club shops at the Dragao and in the city centre, the metallic surfaces of which had been comprehensively stickered yellow and black by travelling Borussia Dortmund fans - but not a single sign of anything Boavista related until I saw a couple of blokes clutching black and white scarves a couple of streets from the ground. "Go in gate 11 or 12," a helpful steward told me as I queued behind a dozen Germans. "Better atmosphere and only 12 euro." There was a panther climbing a post as high as the main stand and a sprinkling of fans amid huge expanses of empty black and white check. "They thought they'd be playing in the Champions League every season," a fan of another of the city's clubs had told me. "But they got a white elephant they'll be trying to pay off for another 40 years. 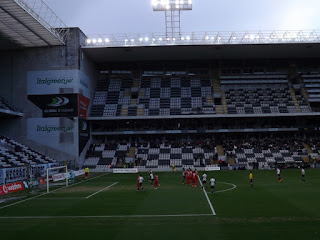 Rio Ave had travelled half an hour on the Metro with just a couple of hundred fans, who'd been given a whole two-tiered stand to themselves. The Sector Ultras Panteras Negras were dotted about opposite, their banners almost as numerous as the support. Both might have been outnumbered by Dortmund supporters, the Germans staying on in the city after their Thursday night Europa League tie. "Bo-ah-veesh-te," belted out the PA announcer. "Bo-ah-veesh-te," the home crowd replied, the muffled dissent of the away end drowned out as the tannoy cranked up a cover of 'I Will Survive'. The ultras were marshalled by a bloke with a bomber jacket and microphone, unfazed by either the rain or the fact he had his back to the pitch. "Nananananana," he started, the mike poised like an unsuccessful turn in a working men's club. "Boavista-whey," everyone chanted back. Midway through the half Rio Ave swung a free kick in from the touchline and Postiga equalled his Tottenham goal tally with a simple run and header. The groans were ominous, the home team failing to threaten until the Rio Ave keeper punched the ball into bodies and a header just cleared the bar. It took a sending off for Boavista to level, Pedro Moreira getting a second yellow for a trip from behind and Renato Santos - who'd swapped clubs in the summer - slamming in the free kick. The crowd started pogoing and a pensioner who'd been angrily pacing the front row turned in triumph, flipped up his scarf and showed a giant crucifix to the celebrating fans. Whatever power it wielded worked again shortly afterwards when the home keeper was fortunate to escape with a yellow of his own after upending a forward on the edge of the box. Boavista assailed the Rio Ave goal, the lower tiers rocked and then the visitors broke upfield, a defender couldn't clear the ball and hundreds of seat backs were flipped in anger as Joris Kayembe slotted into the net. 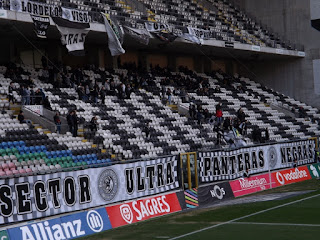 A dismal home defeat for a team in black and white. The story of my footballing life...