Here's a poser:  name a club from northern Portugal that was set up in 1911 after its three founding members watched a game between Porto and Benfica, took its colours from the Lisbon team, raised enough money to buy a football by going door-to-door singing Christmas carols,  played in the UEFA Cup, had a double Champions League winner plus internationals from the Republic of Ireland, Bulgaria and Hungary among its playing squads, lost its home ground to a metro station and folded just six years short of its centenary season... 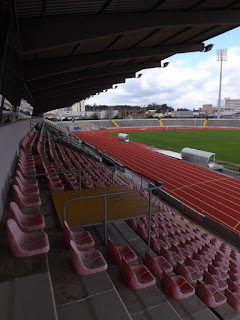 In the decade and a half before they were liquidated in 2005, Salgueiros had been a fixture in the Primeira Divisao, managing a best place of 5th in 1990-91 and aiding in the development of future internationals like Ricardo Sa Pinto, Miklos Feher, Jose Moreira and, most famously,  the 21-year-old Deco,  who scored two goals in 12 appearances between his release from Benfica - "Graeme Souness didn't want me.  I was young and he needed other players" - and arrival at Porto, where he picked up three league titles, one UEFA Cup and the Champions League. One of the club's final signings, current Southampton captain Jose Fonte, arrived from Sporting Lisbon B but swiftly departed when they were forcibly relegated from the second to third tier.  "We were in the top division for ten years," one of the Alma Salgueirista 1885 ultras tells me, "but then we got big dreams about a new stadium, didn't pay the federation what we should have and they made an example of us." 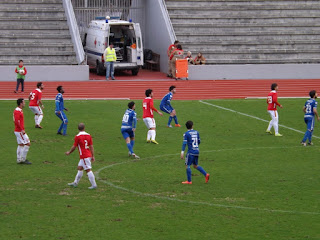 Reformed in the seventh division three years later, the club had already lost their 11,000-capacity stadium to the Metro do Porto - Salgueiros Station built over a pitch that had been in use since 1932 - but still averaged crowds of over 2,200, the fifteenth highest of any side in Portugal.  Four promotions later they are back in  the semi-professional Campeonato de Portugal, playing Cinfaes, a team from a village of just 3,000 people, in the relegation play-off rounds.  "This season has been difficult," the fan says, "but the next one will be better.  We have our old name and badge back and sponsorship from a casino.  With that money we'll be fighting to get back to the second division." 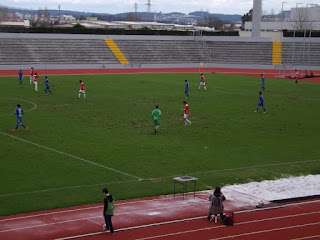 Attendances have been hit by the need to keep moving grounds, the latest, the municipally-owned Estadio Prof. Dr Jose Viera de Carvalho, more than ten miles from their home neighbourhood in the city of Maia.  A running track and sand pit divide the two teams from the four to five hundred spectators in the main stand, which has a corrugated roof, a wooden TV platform and a few thousand mud-spattered seats in several different faded hues.  The other three sides are uncovered and out of use except as a repository for spare hurdles and the parking space for an ambulance. "General public?" asks the woman in the solitary ticket booth as a few elderly socios amble through the entrance gate.  The tannoy runs through the line-ups to a background of chatter and the ripple of applause then blasts out 'Money for Nothing' just before the two sides enter the pitch to a song that sounds a bit like Marlene Dietrich belting out a Disney theme tune. 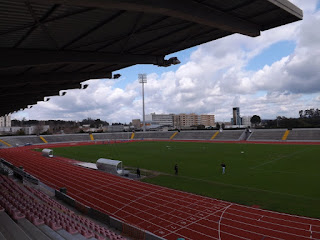 The Alma Salguerista drum and "Nananana" to a Boney M song as a player smacks a set piece into the hurdles.  Cinfaes ping the crossbar and are three times denied by the goalkeeper's outstretched limbs as they dictate possession with an assurance you'd be hard pushed to find in many Premier League fixtures let alone the foot of League One.  Their 20 travelling supporters - including one bloke viewing the play through a camcorder lens and a second in a fishing hat and manager's coat - occasionally shout their approval but are more often engaged in wild gesticulation towards the referee, whose attempts to impose authority are somewhat underminded by the fact he's dressed in mushy pea green.   With almost the final kick of the half, a Cinfaes forward outstrips the defence, picks his spot and then hits a shot so weak the goalkeeper almost ends up sitting on the ball.  "They're in trouble," says a home fan as the manager keeps his side on the pitch for the first two minutes of the break, the crowd hanging back to applaud before rushing downstairs to sink plastic cups of Sagres for €1 or red wine poured from a carton for a bargain 80 cents.  "Nothing in the middle," I think a bloke tells me, beginning a conversation I'm only able to conduct by repeating "Sim" and smiling benignly in agreement.

Switching from one side of the stand to the other brings me closer to the dozen or so ultras, who maintain a steady background rumble as the match plays out sedately, both teams increasingly content with the draw on a sodden surface badly cut up in a game played just 24 hours earlier.  "We need to return to Salgueiros," says one of the fans, wistfully.  "We let kids in for free but none of them can remember what the club was like before.  There was a place for a new stadium 100 metres from where we used to play but the developers wouldn't sell it and preferred to leave it empty.  Now it's just the diehards who travel out here, but back there we'll have 4,000 again instead of 400."