Wherever you are in Guimaraes, you're never far away from Afonso Henriques.  The man who would be king made his hometown capital of the nascent Portuguese state as he fought off his own mother before reconquering Lisbon and the lands to the south.  You could never accuse the city of being shy about reminding visitors of its defining role in the national story:  Aqui Nasceu Portugal (Portugal was born here) proclaims lettering on the road between the railway station and the home ground of Vitoria Sport Clube; in a nearby square a national team scarf has a central position among football-themed neckwear from around the world -  including Reading and Brighton and Hove Albion - on the ceiling of the Cervejaria Martins.  The local football club take its lineage equally seriously: their badge, stadium, nickname and sword-wielding mascot all pay homage to the city's most famous son. 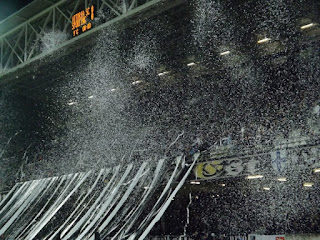 One of only a handful of teams able to pressure the Big Three's stranglehold on Portuguese football, Vitoria, formed in 1922, first made the Primeira Liga in 1941 and have since won two domestic cups, finished third in the league three times and played out 20 seasons in European competition, making it as far as the last eight of the UEFA Cup in 1986-87.  Pedro Mendes, later of Spurs and Portsmouth, and Fernando Meira, skipper of Stuttgart when they won the 2007 Bundesliga, both graduated from Vitoria's youth teams.  Bebe famously spent five weeks and six pre-season friendlies at the club before Manchester United shelled out £7.4 million to take him to the Premier League, while the less well known Randolph Galloway made the opposite journey at the end of a peripatetic career which took in Sunderland Tramways, Derby County, Nottingham Forest, Tottenham, Gijon, Valencia, Uruguay, Costa Rica and three successive titles as coach of Sporting Clube, managing Os Conquistadores for a single season in 1954-55.  Although the black and whites have never come close to matching the achievements of the Lisbon giants, their 30,000-capacity stadium, rebuilt for the 2004 Euros, is regularly around two thirds full in a city that's home to just 50,000 people.  A statue of Alfonso I, sword still drawn eight and a half centuries after his death, tops the UNESCO-listed old town; nearby, his image is on a huge club badge inside the Pintado de Fresco bar, which has table football, English-speaking staff and a soundtrack straight out of summer 1999.  "It'll be difficult tonight," the barman tells me over Blur's Coffee and TV, "but we haven't lost since Benfica came here at the start of last month." 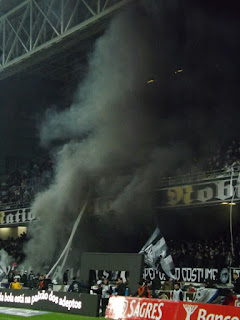 Chasing their first title since 2001-02, Sporting are three points ahead of their Lisbon rivals at the top of the league, having lost only once and drawn four of their 23 games.  The English-speaker at the ticket booth assumes I'm buying for the away end of the ground but a fan sees me queuing up for a black-and-white bobble hat and provides a complimentary seat along the touchline instead.  "Have a nice game," he says as he heads back towards the shop.  The freebie ticket is just two rows from the front, level with the 18-yard line and with unobstructed views of the home ultras, the White Angels, who are busily readying their displays behind the goal. As the sides come out bags of white confetti rain down on long strips of black and white plastic, two smoke bombs are set off, toilet rolls unfurl and a ten-minute chant of "Forza Victoria" starts up, the thousand or so visiting fans barely audible as a constant undertone from the far side of the pitch. 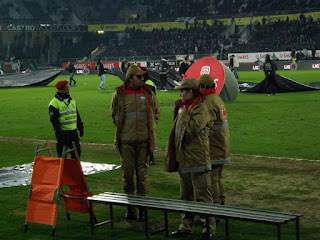 The home team fashion the game's first chance but Sporting - with Sebastian Coates, Bryan Ruiz and William Carvalho in their line-up - soon have the look of the more accomplished side, Vitoria's 20-year-old keeper saving at a forward's feet and then deflecting a prodded shot over the bar.  "Vitoria!" holler the ultras.  "Vitoria!" the other stands punch out in response.  Sporting head over, Vitoria go down to ten when Josue Sa gets a second yellow card but push on regardless, urged forward by the crowd.  "Sporting are like cannabis," a banner announces.  "They're green and cause laughter."  A man in a black and white stetson leans across the hoardings to abuse Jorge Jesus, the linesman and any opposition player who comes near. The visitors contrive to miss with the goal gaping, the home keeper makes another stop and the game ends, scoreless, with thousands of black and white scarves held aloft in the night air, their owners twirling them overhead as the Guimaraes players - down to 7th after their fourth successive draw - finally exit the field. 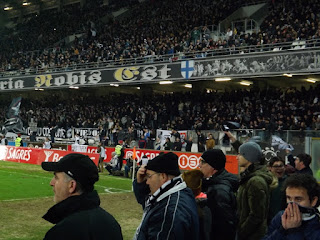 Admission:  Free ( though would have been €15 for the lower tier behind the goal)
Date:  Monday 29th February 2016 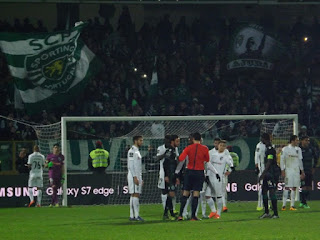 Trains between Porto's Sao Bento and Guimaraes take about an hour and a quarter and cost just €3.10 each way.  The stadium's a twenty-minute walk away at the opposite end of the Largo do Toural, where you'll also find the wonderful Cervejaria Martins and its hundreds of club scarves.  There are no online ticket sales but booths are open to the right of the club shop on matchdays.
Posted by Michael at 09:12