"I hope you've brought a fleece or something," the driver greets me as we pull away from the bus station in Leeds.  "It gets cold up there on Emley Moor."  It's the first weekend in August, the opening, extra-preliminary round of the FA Cup and games are already being shifted from 3 o'clock on Saturday to the following afternoon.  "I wish it was for the telly," someone tells me, "but the cricket season hasn't finished yet and they have first dibs on the pitch." 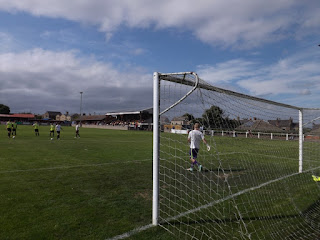 It's not the biggest problem the village side have ever had with their three-sided home. In 2000, twelve years after reaching Wembley in the FA Vase and just two since losing by the odd goal in three at West Ham United in the FA Cup third round, new ground regulations left the 97-year-old club with little choice but to relocate to Wakefield's Belle Vue rugby league stadium.  "We'd been losing money at the Welfare and we'd have been chucked out of the Northern Premier League unless we spent a fortune on the ground," a fan remembers.  "The first season it was great.  Chris Waddle came with Worksop and we beat them 5-3,  we got an international player from Lebanon, the crowds doubled to almost 600 a game and we had over 1,700 in when we played Yeovil in the FA Trophy. But then things started going downhill."  The club changed its name to Wakefield & Emley and the reserve team - still based at the old village pitch - was disbanded in 2005, leading to a split in which AFC Emley, formed by disgruntled fans and ex-committee members, entered the West Yorkshire League Division One.  While Wakefield foundered, folding in 2014 after finishing bottom of the NPL North, Emley are prospering once more in the second-tier of the Northern Counties East.  "The team everyone is talking about," opened Non League Yorkshire's preview of their 2016-17 campaign.  "With the players they've got this season, they should walk their division," one spectator confidently predicts. 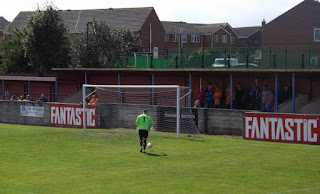 They weren't ever likely to walk their opening game of the FA Cup, Athersley Recreation making the short trip from Barnsley a division higher after a mini-flurry of late-season victories sent Pontefract Collieries down instead.  While they were staying up, Emley twice lost out to Bottesford Town, a 3-2 home defeat denting their chances of automatic promotion and the second, on penalties in a play-off, consigning the villagers to an 11th season in the NCEL Division One.  "The way the season ended is why neutrals love football," manager Darren Hepworth told the first issue of The Bootiful Game magazine.  "We were just seconds away from going up.  Now we have to move forward going into the new campaign...I can't speak highly enough of the people at the club.  Off the field we are making big strides." 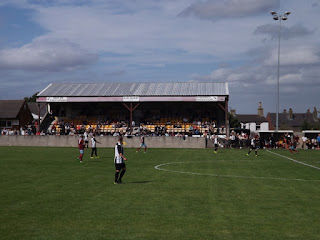 Emley's home - newly christened the Fantastic Media Welfare Ground in a naming rights deal with a marketing agency - is spick and span and freshly painted.  There's a hoarding for 'Supporters Club Scotland', a bloke selling tickets to win a breakfast meat tray and a groundsman of the year award on display in the smartened up clubhouse.  "They used to have loads of stuff about the West Ham game in here," someone tells me as we stand on a club-crested carpet waiting to get served at the bar.   The tea hatch is already running low on steak pie and peas,  hoppers roam the main stand in search of spare programmes while a bloke at the front flicks through a paperback as he finishes off his pint. "About 300 here today, do you think?" the driver asks as the teams run out to the closing bars of The Final Countdown. 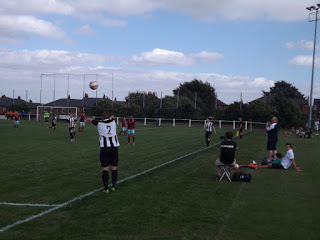 Athersley are easily the better side in the opening half of the game. "Hint of pre-season here from Emley," says the fan in the next seat. "The movement's been too good for them," someone else opines.   "They're just hanging on." The visitors miss a penalty, Ryan Smith fluffing his initial kick and then heading the rebound straight back at Gary Stevens in the Emley goal.  With the stand beginning to empty in anticipation of the break, Kai Hancock wriggles through two challenges, chases in after his own shot and leathers in the opening goal after the luckless Stevens saves once again.  "No more than they've deserved," an Emley fan says.  "We've done nowt here." 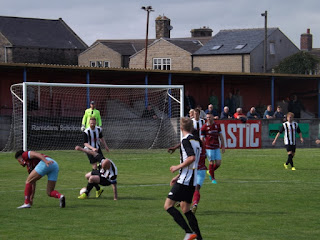 When the home team do start playing, they find it difficult to break down a stubborn, well-drilled Athersley defence.  "Stop messing around," a dad warns his son."It was you who asked to come." "I didn't know I'd be bored," the kid complains. "Can't we go home?"  He's barely finished the question when Ruben Jerome dribbles past three players and blatters the ball diagonally past the keeper.  "Will that be on YouTube?" the kid excitedly asks.  "What a belter!" shouts a gleeful fan. "Only one winner now."  Ashley Fynn, scorer of 73 goals last season plus another seven that were expunged from the records when Lincoln Moorlands Railway resigned their place in the league, has a shot that spirals wide off a defender's boot.  "It's coming now, at any time," an Emley fan urges his team on. We're almost played out when Flynn takes a pass in his stride and slips a shot past the onrushing keeper with the outside of his boot.  Athersley's dejected players drop to the floor, the goalkeeper mutters insensibly and then hoofs the post on his way off the field.  Whether at Wembley in May or Emley in August, it hurts to lose in the FA Cup. 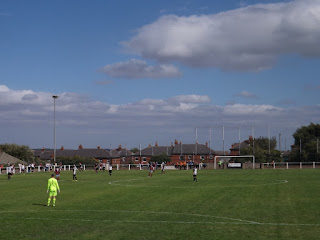