Fitzwilliam doesn't get the greatest of press.  It's portrayed in David Peace's Red Riding quartet as a "dirty brown mining town", benighted, cheerless and sinister.  "The crap town of crap towns," reads one unflattering description, "announced by nuclear cooling towers and the last layer of West Yorkshire hell."  Geoffrey Boycott, that epitome of the dour, obdurate Yorkshireman, grew up there in a Coal Board terraced house, as did Larry Lamb, a newspaper editor, The Guardian wrote, "of half-suppressed anger...and defiant character".  Defiance was stamped right through the village's part in one of the more notorious nights of the miners' strike, a mob-handed police raid on a local pub ending with the station in neighbouring Hemsworth under siege and the officers inside run out of town. “The police came over the bridge, swinging truncheons and chanting,” a witness remembered. “They knocked one lad down and kept hitting him. His uncle told them they'd given him enough, then they knocked him down and gave him the same. Then the people all came out of their houses. The whole village just erupted. Whatever they could do to get back, they did it". 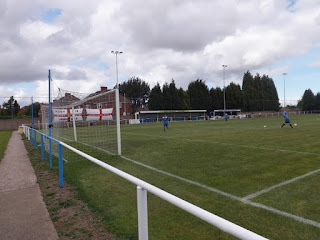 The pits went soon after, the town's football club had gone just before.  Hemsworth Colliery was the first team of Cyril Knowles, who started as a 15-year-old miner and blossomed into one of the most accomplished full backs of his generation, with more than 500 professional appearances, four England caps and a song in his honour at number 14 in the charts.  His brother, Peter, went to Wolverhampton Wanderers, played for England U23's and quit, aged 24, to become a Jehovah's Witness.  "Bill Shankly wanted to sign him for Liverpool but he turned them down. Of course we all understood why a few weeks later," a teammate recalled. "It's a crying shame. They were saying he might go to Mexico for the World Cup the following summer, but he just gave it all away." 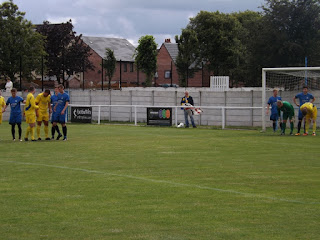 Founded in 1981, the year before Wolves finally ripped up Knowles' registration and accepted he was never coming back, Hemsworth Miners Welfare have progressed from the Doncaster and District Senior League Division Three to the step five Northern Counties East.  Having cantered to  last season's NCEL Division One title by a 12-point margin, the Wells announced themselves to the top-flight with two goals in the first eight minutes of an opening night win at Parkgate, capping a week in which the club got its first contracted player and put Runcorn Linnets out of the FA Cup. "We expect to do well," boss Wayne Benn said before the tie. "The club have never had it as good. We are playing at the highest standard we have ever played at. Attendances are up and there is a massive feel good factor about the place". 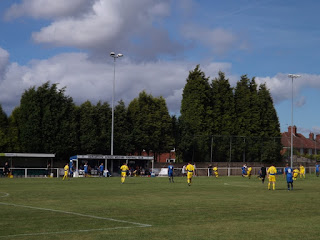 Optimism was in short supply when the collieries first closed, an ornamental pit wheel in front of the station ramp and a metal sign for the Fitzwilliam Country Park the only visible reminders of an industry that once gave work to thousands of men. Railway Terrace, where police and miners battled in July '84, runs behind the tracks towards the MDC Community Stadium, reached by a circuitous route at the back of a show home and the cricket club.  A Carlsberg England flag flutters above the entrance. "Want a programme, mate?" floats a voice through a portakabin hatch.  A set of plywood stocks lean incongruously against the clubhouse wall, inside which a framed print of Cyril Knowles in a Spurs shirt faces the bar and kitchen.  I take my food to a deckchair outside, the two teams warming up in opposite corners while a pair of fans tie flags to a fence.  "POEY IS INNOCENT" proclaims one in reference, apparently, to a Leeds fan convicted of chucking a coin at a game against Leicester; the other, more prosaically, states "Hemsworth Miners Welfare FC".   The club's name is also painted across the top of the dugout block, beside a covered stand with three blocks of green seats and one of navy blue.  "Fast start, boys," cajoles a Hemsworth defender.  "From minute one," Garforth echo. The home team hone in on goal from the off, a shot gets deflected and when the corner's played in Nash Connolly leaps unopposed to head his third goal of the season.  "Good start," Benn says laconically.  "Hellfire," groans a Garforth fan. "There are still 89 minutes left."  Seven later, just seconds after the visitors lump a shot on to the cricket outfield, Connolly turns provider, crossing for Del Pollock to fire in a second goal from close range.  "Awful Garforth," the fan shakes his head forlornly.  "Just awful." 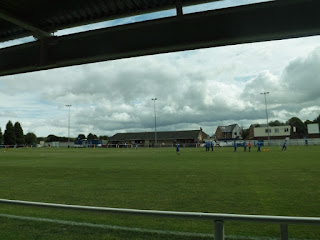 The yellows rally, a shot seemingly deflected over the fence but, to much chagrin, a goal kick awarded instead.  "Every fucking time," a defender complains from fifty yards away.  "No point in you coming, linesman," the fan grumbles softly.  "Waste of space, waste of space."  Almost straight from the restart Hemsworth net a third, Brice Tiani lifting a pass over the Garforth defence and Connolly running on to score. "Twenty minute," the fan chuckles, turning to look at the rest of the stand.  "They're a good team. Hemsworth, but you can't be defending like that." 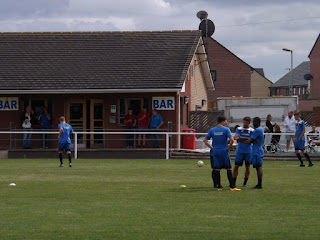 The away side are more resilient thereafter, but the hosts are always that bit sharper and more precise in possession, only some profligate finishing and the Garforth keeper's palms preventing Pollock and Sam Jones from extending the lead.  "Could've been closer but a fair result," Garforth tweet at full-time. "They'll be up there," reckons a travelling fan.  "But it looks like a long season for us."