Football,  wrote Sporting Females author Jennifer Hargreaves, "has historically unified men and marginalised and trivialised women".  It had been that way since the very start.  In 1881,  5,000 Glaswegian men turned out to watch what the Nottinghamshire Guardian hoped would be "the first and last exhibition of a female football match in Glasgow",  rushing on to the pitch after 55 minutes and forcing the players to "prematurely take refuge in the omnibus which had conveyed them to the ground".  Games were played more successfully in Bradford and Blackburn, but the Manchester Guardian deemed the "costumes were neither graceful nor very becoming" and the  Leeds Mercury mused that "public feeling has demonstrated against the unseemly exhibition in such a manner that the authorities are now frowning down the innovation" when a second pitch invasion occured at Manchester's Cheetham FC. 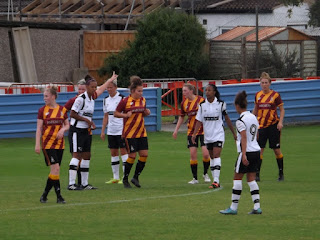 Things began to change in the years during and immediately after the Great War.  With the Football League suspended in 1915,  women's games were staged instead to raise morale and funds for war charities.  22,000 assembled at Middlesbrough's Ayresome Park for the 1918 Munitionette's Cup Final between Blyth Spartans Ladies and a team from Carlisle; on Boxing Day 1920, there were 53,000 inside Goodison Park and 10,000 or more locked out for a game featuring teams from Preston and St Helen's. But the following year, with the male competitions back up and running,  the FA peremptorily decreed that "the game of football is quite unsuitable for females and ought not to be discouraged". "It came as a shock and we could only put it down to jealousy," one player recalled. "We were more popular then the men." 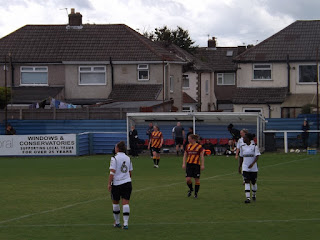 Barred from using FA-affiliated pitches until 1971, women spectators were often made to feel just as unwelcome too.  In 1985, there was just a single women's toilet in the whole of Bradford City's Valley Parade, though this was at least one more than there had been during the 1950s.  By 1994, three years after the formation of the first national women's league, female fans still made up as little as seven per cent of the crowd at most men's league games and John Williams, of the Centre for Football Research, reported a prevailing view that  "football is men's space and place; where men go to get away from women". 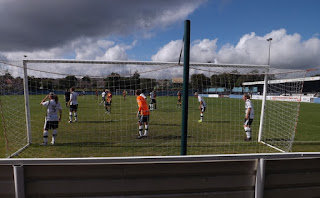 Modern football, for all its many faults, is generally more diverse and welcoming, though the women's game suffers from the same kind of sneers it did in 1881.  "Is it even a sport?" a student asked when I told her I was going to watch Bradford City Women's FC.  Formed in 1988, City's fortunes have closely mirrored those of their male counterparts: two seasons in the top-flight, a near miss in the League Cup and back-to-back relegations dropping them as low as the fourth division, though they now play back in the Premier League North (despite the adjective, the third-tier of the women's game). "The ambition is to reach the Super League," chair Sally Thackray told the Bradford Telegraph and Argus. "But that is a whole new ball game. You have to pay players, you need a much different infrastructure.  We need more volunteers to run the club, but also investment. We need to be able to attract better players. You need £175,000 in the bank to get there.”

The opening day pitted City against Derby County, last season's early pacesetters before they faded disappointingly away to seventh.  The Ewes spent the close season overhauling their starting line-up while the home side were trying to adjust to the departure of Steve Winterburn after a decade in charge.  The new boss, Lee Harrison, is partnered by Charlotte Stuart,  who also captains the team from the centre of defence. "We haven't really set any targets for the season as we are mostly rebuilding,"  Harrison reckons before the game. The team are now based at Eccleshill United's Plumpton Park, a ninth-tier stadium with a car park, one previous visitor tells me, "that's like Passchendaele in winter".  A single turnstile opens into a ground of blue corrugated metal, tarpaulin covers, signs for Napoleon's Casino and Restaurant and a slate grey portakabin doling out coffee and pies. A chequered Derby County flag hangs from the main stand, whose randomly numbered blue tip-up seats house 50 or so spectators and a travelling support of one.  "The pitch slopes a bit, doesn't it?" a bloke says to his daughter, the grass dropping as sharply as Chris Hutchings' dismal West Yorks galacticos did in 2000-01. 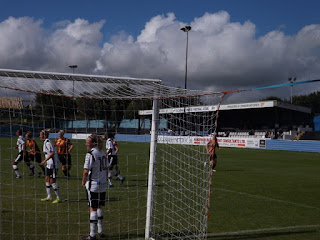 "Do what we do," encourages a Bradford player.  "Let's win it back, girls," says one of the Derby centre backs. A bloke complains about the quid cost of a programme and two horses potter about in an adjacent field.  The Ewes start brightly, thudding a pair of shots into corrugated perimeter boards.  "Relax girls," says the City skipper as a clearance clangs against the top of the main stand. The visitors are more composed, Samantha Griffiths expertly curling a free kick over the defensive wall for the opening goal on 15 minutes.  The home side respond with a near miss, a shot trundling back off the post.  "We go again," their keeper shouts, borrowing a familiar standard of the male non-league lexicon. Her opposite number limps off, replaced in goal by defender Lorna Abbey, but while City get the ball forward quickly they fail to seriously trouble the stand in. Despite the increasing frustration, there's a noticeable lack of shouting aimed at linesmen and only tame admonishment for the referee.  "Every time," moans the City right back when a Derby player pulls her back on halfway. 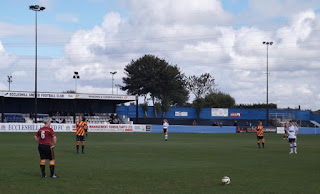 Bradford put a penalty over the crossbar and against the roof a stand before County score a second at the third attempt, Nicole Dale tapping in after the keeper saves twice.  "Big push," Harrison urges his team but the best they can manage are a few corner kicks, the game increasingly niggly as Derby close out the win. "Good game," a bloke claps. "In the first half some very good football was played," County's Facebook page says, "and then the second was a battle."

There's an excellent overview of the early years of women's football here.
Posted by Michael at 21:22