And so at last we're off again. Five divisions,  57 teams and over 100 seasons since it was first contested, less than a decade after the founding of the Football League itself, the York and District League gets yet another opening night.   The first round of fixtures pits Huntington Rovers - managed by ex-Huddersfield winger and FA Cup semi-finalist Iain Dunn - against Osbaldwick, has F1 Racing motoring to 2014-15 title winners Riccall United and gifts defending champions Old Malton St Mary's a free evening while their Ryedale neighbours, Brooklyn and Malton and Norton FC, go head to head on an old bacon factory recreation ground.  Back towards York, Wigginton Grasshoppers,  pipped at the last by Old Malton in April, kick off the new seasons against Copmanthorpe.  "I'll be disappointed if we're not challenging again," manager, fixture secretary, match reporter and occasional first-team player Graham Ireton told The York Press. 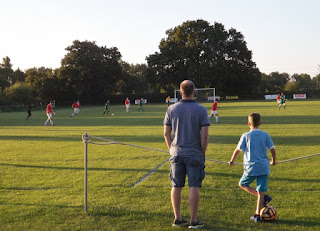 Ireton moved to Mill Lane as player-coach in 2008, 26 years after John Jeffery established the club.  "Simply an extraordinary man who has made a real difference to the lives of so many around him,"  Ireton says of a man who still combines the roles of president, groundsman and chief kit washer. Among those Jeffery has helped along the way are West Ham's Sam Byram, a Wigginton youth player before he was picked up by Leeds United, and Alfie Beestin, who recently penned a one-year contract with Doncaster Rovers.  "He's a good player and he's got great potential," Rovers boss Darren Ferguson reckons. "I'm really pleased to get him onboard."

"Success through Endeavour" the club's badge says.  Last season, the Grasshhoppers fielded 20 teams, all funded by donations and match subs. The senior side, who won 21 of their 26 league games and averaged over four goals a game, now chip in £30 a season each plus £4 a start and a quid if they come off the bench.   Twice champions of the York League's second tier and York FA Cup winners in 2004, the green and whites play their home fixtures on a pitch behind the village's squash and sports club. "FA Charter Standard Community Club" announces a sign at the entrance. "Welcome to Wigginton Grasshoppers FC". The pitch is straight ahead, roped off on three sides with a hedge and six advertising hoardings marking out the other.  Aside from the breezeblock dugouts, the only cover comes from a couple of open-fronted corrugated sheds with bench seating for six.  "Winners!" yells a Copmanthorpe defender plaintively as an early goalkick drops out of the sky.  "Let's have a gamble," a midfielder urges.  "Don't have a go at the ref," the Wigginton goalkeeper loudly reminds his team.  "New rules, remember?" 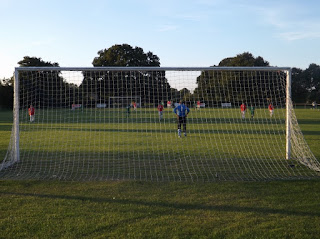 Copmanthorpe clank the bar with a header, the rebound unceremoniously booted out of play for a corner.  The ball comes back into the box, the keeper can only flip it upwards and when it drops back down an away player heads it over the line. "Shit," says the keeper. "Sorry, lads."  A few latecomers turn up with fish and chips, Wigginton boot three shots into the hedge and then turn the game on its head with two goals in a single minute.  "Better two-one than nil-nil," a bloke says knowledgeably, turning to his mate. 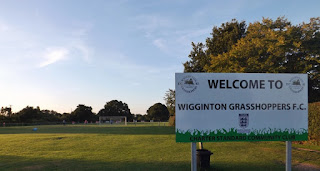 There's a five-minute turnaround, the players sitting out on the grass until the officials are beckoned back out of a portakabin.  A cockerel crows in a neighbouring field and a game of crown green bowls starts back by the main road. "Second phase," Copmanthorpe's keeper says to his teammates.  "Turn and face," a defender implores. "On my shout we go." A player goes down claiming he's been elbowed in the face, there's a dive in the penalty area and a Wigginton player gets yellow carded for screaming "How's that not a fucking foul?" a few metres from the referee's face.  An assessor scribbles furiously, propping his clipboard up on the rope.  Copmanthorpe's keeper stops taking goalkicks but saves two shots with his knees.  "Let's keep it going lads, eh?" he shouts to his team.  They do, but the Wigginton - third and second in the last two seasons - score again late on. One game, three points.  Is this the season the Grasshoppers finally break their title duck?