Named after a Wallsend social club and a firm that sticks company logos on polo shirts, Lindisfarne Custom Planet blasted out of the Tyneside Amateur League with the 2013-14 title and the Bill Gardner Cup, got a second promotion at the first time of asking and settled into the midtable orbit of the 12th-tier Northern Alliance Division One.  And then they were gone. 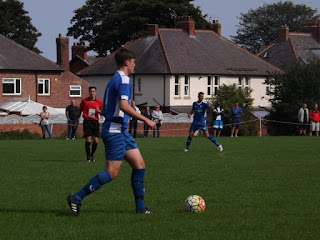 A summer link up with Monkseaton Juniors brought a change of identity and a brand new place to play, the rechristened Monkseaton FC moving a couple of miles north from the Rising Sun Sports Ground to Churchill Playing Fields, shared with local league cricketers, a running club and their own reserve team.  Renamed and reinvigorated, the red and blacks had won three and drawn the other of their opening four games, though their 13-goal haul was still just half that of Gateshead's all-conquering U19s.  The Heed fielded four of their first-team squad in a 6-1 opening day crushing of Gosforth Bohemians and were predictably ensconced at the top of the division with maximum points and a goal difference already up to plus 24.  "You've essentially got a league of hairy arsed blokes going up against a squad of kids who've all come through academies, get professional coaching and  train five times a week," one veteran Alliance watcher reckoned. "There's a lot of potential," manager Micky Cummins, a veteran of six professional clubs including Middlesbrough, Port Vale and Rotherham United, admitted after his team pummelled Heaton Stannington's reserves 7-0.  "But we looked lethargic at the start of the second half. We were slow and sloppy and gave up possession quite easily."  Small mercies, you imagine, for the rest of the league. 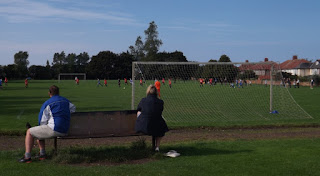 It was the weekend of theTall Ships Regatta at Blyth, Newcastle against Brighton in a teatime kick-off and Whitley Bay v North Shields - dubbed El Clasicoast by one set of fans, but "obviously El Coastico" to the other - in the Northern League. "A clash of cultures," one Bay supporter says, "Shields were carrying on like it was Green Street Hooligans last time they came here.  Our lot are a bit more Merchant Ivory." A smattering of Bay fans were already out in the town centre pubs, from where I walked the last 15 minutes inland to Monkseaton. Gateshead's team were emerging from a changing block that was doubling as a cricket pavilion, skirting the boundary rope on their way to the pitch.  There were four spectators on park benches, a handful more on the rise beneath some trees and a dozen or so reclining in the sun on the opposite touchline.  "From the start," shouted Monskeaton boss Anthony Fawcett, standing alongside a pile of holdalls and his two subs.  His team gave as good as it got in the first half of the game, discomforting the table-toppers and only denied what looked a clear penalty by the referee's positioning.  "Not my half of the pitch," he explained, his assistant having proved little help.  "Howay ref, are you gonna give us summat or what?" called a bloke from the rise.  It wasn't until the 40th minute that Adam Wrightson - on an 18-month pro contract after playing six times in the Conference last season - laid on Gateshead's 27th goal of the season. "We've done so well up to now," a Monskeaton player moaned. 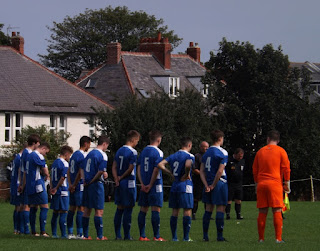 The 28th followed five minutes into the second period, Wrightson shimmying between challenges before placing the ball into the corner of the net.  "Great goal," said Cummins.  "We've got to keep going," a Monkseaton player urged his team. Wrightson scored his second ten minutes later, the home side by now scarcely able to get out of their own half. "One man show," a Gateshead sub applauded as the red shirts stomped back to midway and their reserve team - beaten 6-1 in the Tyneside Amateur - carted goalposts back from the neighbouring pitch.  The visitors were reduced to ten, a substitute limping off shortly after coming on, Monkseaton rallying to score a deserved goal of their own before Carl Taylor finished it with a late fourth.  "Disappointing day at the office," the home side tweeted but Fawcett's impressive side won't lose many more games this season. 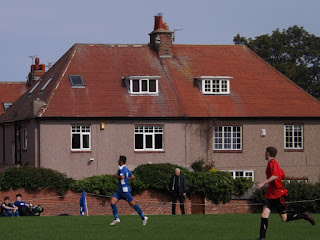